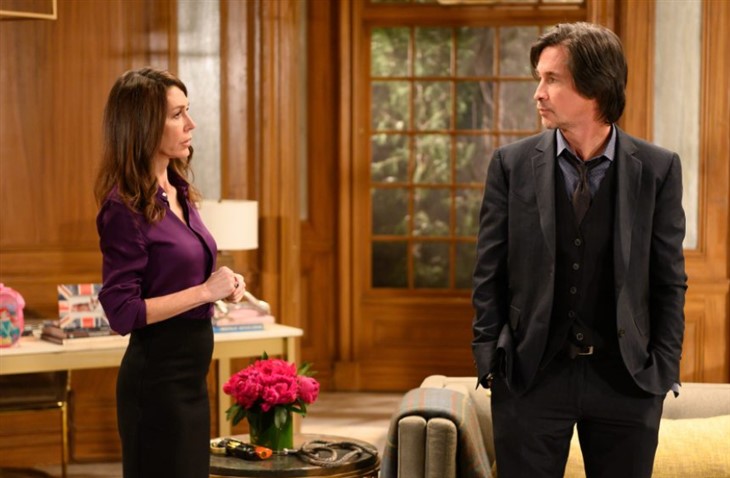 General Hospital (GH) spoilers tease that in Port Charles, NY Hamilton Finn (Michael Easton) will confess to Anna Devane (Finola Hughes) and Elizabeth Baldwin (Rebecca Herbst) will confess to Jason Morgan (Steve Burton) about what really happened to Peter August (Wes Ramsey) in upcoming episodes of General Hospital. But when they look for Peter’s body, he’s not there!

General Hospital viewers know that guilt has been weighing heavy on Hamilton Finn’s conscience, even though Elizabeth Baldwin continues to tell him he did the world a favor by ridding it of a monster like Peter August. But after her trip to New York City with Valentin Cassadine (James Patrick Stuart) and talking to the pilot that was supposed to pick Peter up on the roof of General Hospital, David Hopkins (Charles Leeshock) they found out there was another man on the roof with Peter. By the description, and Finn’s seeming evasiveness with Anna as she gave him some updates in the hallway by the elevator in General Hospital after Harrison Chase (Josh Swickard) went down on the elevator, Anna was already wondering if the other man was Finn.

Previously, she had asked Elizabeth to get her a list of personnel who had worked the day that Peter disappeared, but by the time she and Valentin had talked a little more about it, it was plain that she already suspected Finn was the other man. Elizabeth had interrupted with the list just as Finn was about to come clean to Anna about Peter, and when she had talked to Dante Falconeri (Dominic Zamprogna) Anna had mentioned trying to get tapes from the security cameras that were on during that time period. As General Hospital viewers will recall, Cyrus Renault (Jeff Kober) had cameras to two stairwells disabled, one of them being to the sub-basement that once housed Helena Cassadine’s (Constance Towers) lab. This is where Finn and Elizabeth hid Peter’s body in a morgue freezer.

In upcoming episodes of General Hospital, Anna will confront Finn and he will confirm her suspicions. Anna had known that he had been trying to get another vial of antidote from Peter that day, because she had previously tried and failed. General Hospital viewers will recall that the two argued over the antidote, with Peter flinging the one bottle he had off the roof. Chase was dying and that angered Finn enough, after Peter baited him with saying everything was Anna’s fault, to run after him to the stairwell and push him down! However, any good attorney could spin that into a struggle with an accidental fall. But Finn is a little too honest for his own good, as Elizabeth has told him. As Finn comes clean to Anna, Elizabeth comes clean to Jason, who she wanted to enlist to get rid of the body to begin with, but Finn had declined.

Neither Anna or Jason are exactly heartbroken over the demise of Peter, although Anna may despair over what became of Maxie Jones’ (Kirsten Storms) and Peter’s baby, Louise Jones (Harper and Scarlett Bloom). Jason tells Elizabeth not to worry about it, he will take care of everything. Both Anna and Jason are much more committed to helping Finn and Elizabeth out of their terrible conundrum than they are about anyone paying for crimes. Peter had paid for his, and that was all they will care about. Anna and Jason go down to the sub-basement together – but when they arrive, and open the morgue freezer – no popsicle Peter!

The body is gone! Finn and Liz were sure he was dead – if a trained doctor and nurse cannot properly assess a state of death, who can? Has someone else moved the body and disposed of it? That will be the big question, because that area has been sealed off from the rest of the hospital and the freight elevator on the roof was the only known access! Anna and likely Valentin but possibly Jason will investigate who knew about the area and who might have moved Peter. But the worst case scenario may be true – that either Peter wasn’t dead, although that seems impossible, and got up and escaped himself – or he had a rescuer! Peter may again turn up, like his late father Cesar Faison (Anders Hove) did time after time, like a bad penny!