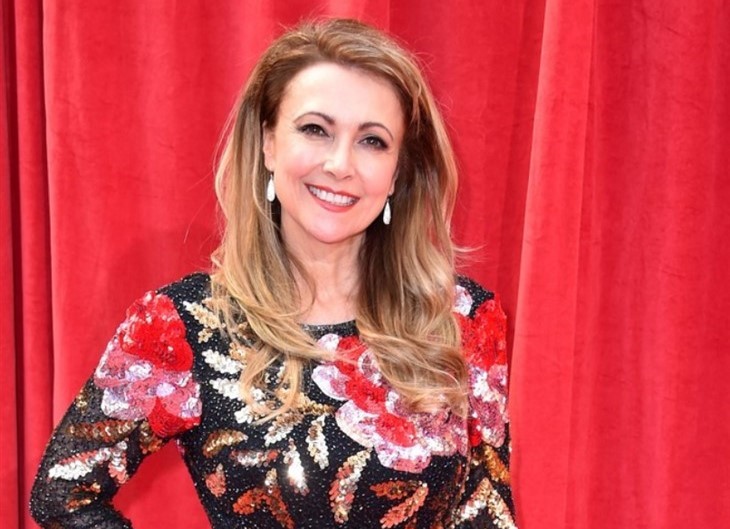 Because General Hospital star Emma Samms couldn’t travel to Los Angeles to film her scene as Holly for the soap this year, she had to get creative. And by creative, we mean she had to do it from thousands of miles away in her home in the UK. Here’s what she has to say.

Unfortunately, Emma says that her illness, along with the entertainment industry’s shut down due to Covid-19 had left her reprisal as Holly in limbo. That’s because she had to stay back home in England because of all the travel restrictions that we brought on by the pandemic.

However, Emma says that she did manage to do one scene remotely in her guestroom, which left some people in her home in shock to their core! Speaking to Soap Opera Digest in a new interview, the actress says that her partner Simon McCoy helped her set up a camera in her room. She recalled, “He waited outside the room and I did my thing, acting very upset, and I’m very used to that, switching those emotions on and off, and when I opened the door and the look on his face – he was traumatized! He looked horrified from hearing me scream!”

General Hospital (GH) Spoilers: Can Cameron And Joss Help Save Each Other? https://t.co/KRWgLQaLvx pic.twitter.com/Ia98xP8tlV

She says that she did it to assure viewers that reports of Holly’s death had been exaggerated. But at the same time, she can’t wait to get back to Los Angeles and of course, back on the set of General Hospital. For now though, she’s happy with the result of the footage that she had to film on her own. And we must add, fans are just as impressed that she managed to do it – and with complete professionalism, too!

Emma added, “I thought they did the big reveal so brilliantly, with all the monitors and the music, and it really was a surprise, because they hadn’t teased it. It was superbly done! You put that in any feature film and you’d be proud, I think!”