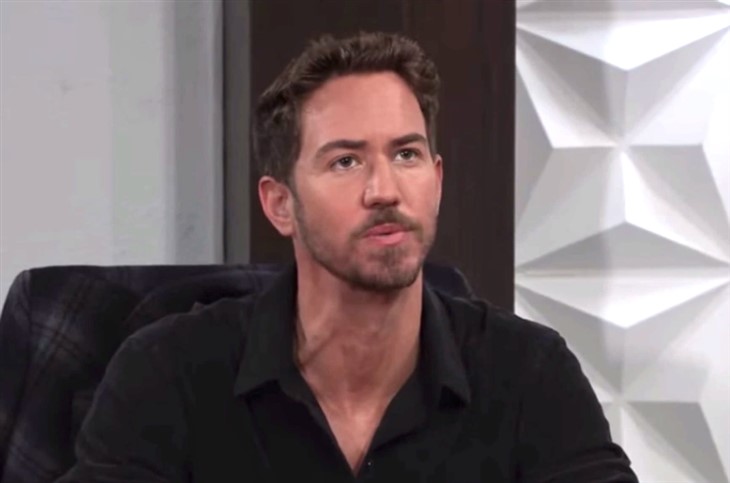 General Hospital (GH) spoilers tease that some exciting developments will take place on General Hospital during the next few weeks, May 31 through June 11. Questions such as if Peter August (Wes Ramsey)will survive his downward spiral – or should that be a downward stumble – will Maxie Jones (Kirsten Storms) go through with her plan for baby Louise August’s (unknown baby actor) safety and more will be answered!

General Hospital Spoilers – May 31 Through June 4

General Hospital’s episode for Monday, May 31 will be a rerun, but starting June 1 will be all-new episodes. June 1 through 4 there are hints that Peter may actually survive his tumble down the stairs if he’s not already a goner by the time Elizabeth Baldwin (Rebecca Herbst) has taken his pulse and called for help. Meanwhile, Dr. Portia Robinson (Brook Kerr) will feel like a prisoner in her own home as a wounded Cyrus Renault (Jeff Kober) will continue to force her to attend to his bullet wound, with Trina Robinson (Sydney Mikayla) also in danger if she was at home at the time. If not, she’ll walk into a very scary situation!

General Hospital summer spoilers tease Trina may or may not make it to her graduation party, which Portia was working on with Curtis Ashford (Donnell Turner) in last Friday’s episode so this will be very, very serious situation indeed! Curtis will receive an unsettling phone call, and even though he and Port Charles Police Commissioner Jordan Ashford (Briana Nicole Henry) are getting divorced, they will work together to save Portia and Trina, that can be assured. General Hospital viewers have to wonder if Marcus Taggert (Réal Andrews) will also show up to save Portia and Trina. Laura Collins (Genie Francis) will find herself in danger as well – she will make a frightening discovery and her life will be threatened. She and her psychiatrist husband Kevin Collins (Jon Lindstrom) will have a very emotional conversation over all of this.

Jason Morgan (Steve Burton) hopped it on down from being on the run in Canada to intervene in a shooting at Pier 55 and he and Dante saved Nikolas and Ava Cassadine’s (Marcus Coloma, Maura West) lives, but Dante had to take Jason in. If Gladys Corbin (Bonnie Burroughs) makes it okay through surgery to remove a bullet put there by Cyrus, hopefully, she will follow through with recanting her testimony against Jason, allowing him to be exonerated. Britt Westbourne (Kelly Thiebaud) was waiting for him to come back in their hiding place across the Canadian border. She will be taken aback and caught off guard by someone or something in the meanwhile! The mystery of who shoved Peter down the stairs should be revealed unless General Hospital has a whodunit planned. Dr. Hamilton Finn (Michael Easton) will have a confrontation with Peter and Peter will be backed into a corner, so it could be Finn who is the one who pushed him.

Or, Peter could have just plain been a little clumsy in his rush to catch up to Maxie, or maybe someone dropped a banana peel in a convenient place for Peter to slip on! Liz, however, will be privy to a terrible crime and protect her family members, so maybe she saw Peter pushed and who knows…it’s the doctors who take the Hippocratic Oath to do no harm, not the nurses! Brook Lynn Quartermaine (Amanda Setton) makes it over to Pawtauk, New York after Maxie made sure everything fell through with evil fake Nurse Chloe Jennings’ (Kimberly J. Brown) assignment, including the evil nurse herself! Perhaps Brook Lynn will get to meet her possible cousin Dr. Austin (Roger Howarth) – surely Maxie wouldn’t leave her hero to die in the woods! Rumor has it he could be Jimmy Lee Holt’s (Steve Bond) son.

General Hospital spoilers from June 7 through June 11 have Britt possibly back in Port Charles to deliver an apology to Maxie in person, although her and Jason’s Canadian hideout may not be that far from Montauk. Peter and his evil nurse both knew about the plan for Maxie to deliver Louise in Beecher’s Corners, so if they haven’t heard the bad – or good news, Maxie, Louise, and Brook Lynn could even be in the Canadian hideout to make the switch of Louise to Brook Lynn. Maxie will understand why Britt couldn’t help as planned, especially since Louise didn’t exactly wait for the original plans either! Later in the week, however, Maxie, Brook Lynn, and Britt all appear to be back in Port Charles. Peter may have survived since Maxie goes through a difficult conversation with the help of Damian Spinelli (Bradford Anderson) and that is probably the lie that her baby didn’t make it through the birth which will be very believable considering the circumstances.

General Hospital Spoilers: Will A Push Down The Stairwell Kill Peter Or Will He Suffer Paralysis? #GH #GeneralHospitalhttps://t.co/tejW8cIAWi

Spin will help her make that announcement to her parents, Mac and Felicia Scorpio (John J. York, Kristina Wagner). Brook Lynn still needs a baby so she can get ELQ back from Valentin Cassadine (James Patrick Stuart) though, so whether Peter is alive or not Maxie will keep her promise, even if it were to turn out to be a temporary situation. Peter could be in a coma but Maxie wouldn’t want to take any chances. Brook Lynn and Valentin will share a warm and fuzzy moment when he meets “baby girl Quartermaine”.

Danger will still lurk in Port Charles, however as Nikolas and Ava Cassadine (Marcus Coloma, Maura West) will have to call the police over to Wyndemere when the presumed stalker appears to escalate. Dante will respond to the call. Auntie Stella Henry (Vernee Watson) will arrive in town to see Curtis, and it appears Portia will be okay since she butts in and likely pontificates about the impropriety of Portia’s involvement in Curtis’ life, and no one will be surprised if he gets an “I told you so” about his situation with Jordan as well!

Days Of Our Lives (DOOL) Spoilers: Belle Brady Confesses To Save Claire From Jan

Kate Middleton May Be Away From Her Kids, but She Sweetly Holds Them Close To Her Heart