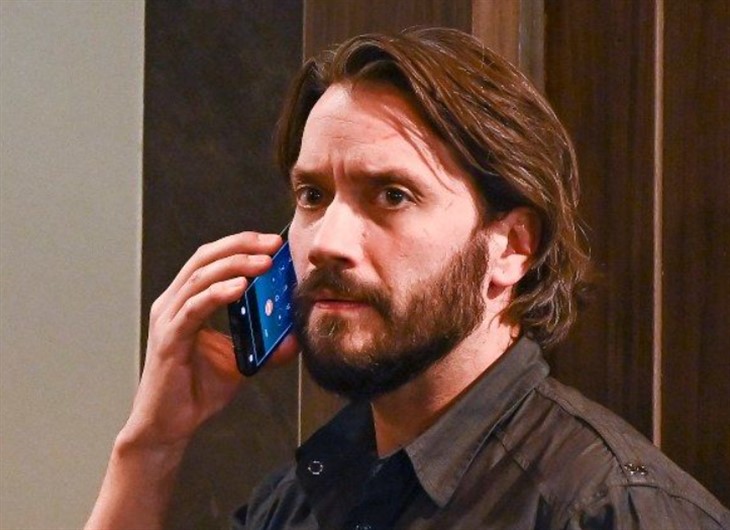 General Hospital (GH) spoilers tease that in this week’s General Hospital Sneak Peek, Dante Falconeri (Dominic Zamprogna) warns Peter August (Wes Ramsey) that if he hurts Maxie Jones (Kirsten Storms) or makes her regret her marriage, he’ll have to answer to him!

In a room at the Metro Court, where the double wedding of Peter and Maxie and Dr. Hamilton Finn (Michael Easton) and Anna Devane (Finola Hughes) is to take place in the ballroom, Dante pays Peter a visit. Peter is getting dressed and asks Dante if he is there to ask for his security job back. Dante tells him no. Dante continues, and he tells Peter that Maxie’s happiness is everything to his ex-wife Lulu Spencer (Emme Rylan) who is Maxie’s best friend.

Lulu, as General Hospital viewers will remember, was severely injured in the explosion of the Floating Rib and suffered a brain bleed that put her into an indefinite coma. Dante continues telling Peter that because Lulu cannot be there herself for obvious reasons, he thought that he would step up in her behalf to give Peter a friendly warning. Neither Peter nor Dante look real friendly towards each other at that point, however.

Peter looks irritated and Dante looks like he means business. Dante, of course has a mission to complete but Liesl Obrecht (Kathleen Gati) has to trigger his kill switch with a pen click before he can kill Peter. However, if looks could kill, Dante’s definitely aiming for Peter! He tells Peter if he ever does anything to hurt Maxie or to make her regret her marriage, Peter’s going to answer to Dante!

An obviously exasperated Peter puts his hands on his hips and takes a deep breath, then turns around towards the mirror to finish buttoning his dress shirt. Peter tells Dante that he seems a bit on edge, and he hopes Dante isn’t harboring any resentments towards him for Alexis Davis’ (Nancy Lee Grahn) drunken attack. General Hospital viewers will remember she lunged towards Franco Baldwin (Roger Howarth) with a syringe loaded with lidocaine at the hospital, and Dante jumped in front of Franco. The shot nearly killed him! Dante continues, telling Peter no, he knew Alexis was going for Franco and he just got in the way.

General Hospital (GH) Spoilers: Brook Lynn Back In PC With Trouble On Her Mind, What Will She Do? https://t.co/bAacwwXiG0 pic.twitter.com/4zqlwbtXoU

Dante then tells Peter, now that he brought that up, he has to know that something like that could happen when he decided to publish that story on Franco. Peter had considered the article a public service, warning the public that the former serial killer could again turn to serial killing because his brain tumor had returned! This, of course, not only put multiple potential targets on Franco’s back, but also provided Peter with a convenient cover if he decided to take Franco out himself, knowing that Drew Cain’s (Billy Miller) memories were returning and he was remembering things Peter himself was involved in. Peter, done buttoning his shirt, turns away. He turns around with a smile that can only be described as devilish and tells Dante he was just doing his job. Dante tells Peter he can appreciate that as he looks Peter straight in the eye. He tells him we all have jobs to do, but sometimes people get hurt!