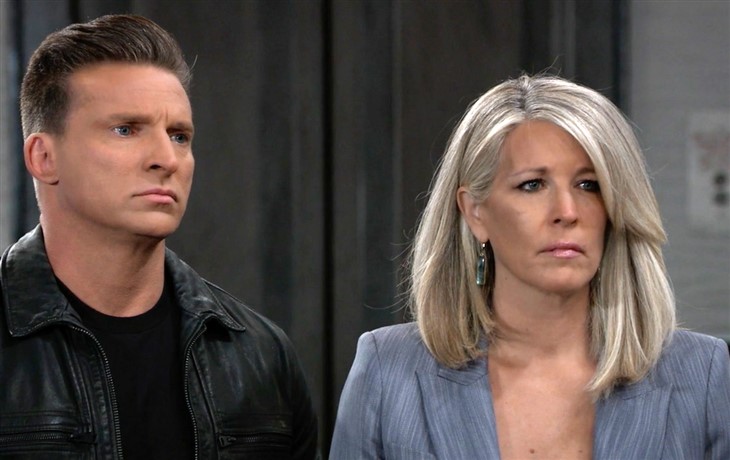 General Hospital (GH) spoilers reveal that a magnitude 10 earthquake rocks Port Charles, New York when a jawdropping marriage takes place. The widow Corinthos and Stone Cold make it official for business purposes but will they take it a step further and do the deed?

Jason Morgan (Steve Burton) and Carly Corinthos (Laura Wright) have no choice but to marry in order to save the mob business that presumed dead Sonny Corinthos (Maurice Benard) forged. Once they tie the knot, will they both get drunk and betray Sonny in the worst way possible?

Those weasely Five Family members can’t help but pick at a Corinthos Organization they deem weak without Sonny at the helm. Carly thought she convinced them she can handle everything but a dock explosion and stolen cargo prove that someone is sending a signal that they will try to take over.

The only alternative is for widow Carly and right hand man Jason to marry and consolidate power thus present a united front to the rest of the mobsters. We can think of worse alternatives than waking up to Jason’s baby blues everyday!

What do you think GH fans, do you like Jarly for real? For so many years they have been in each other’s orbits, and now with Sonny “gone” they could let their latent feelings fly. Especially of they’re supposed to be faking a happy marriage together.

Jason is in the mansion already, so a hook up would be exceedingly easy. Is this why Carly keeps pushing Josslyn Jacks (Eden McCoy) to move into the dorms?!

Can you imagine the fireworks that explode when Sonny returns to town? He can’t be Smike the table cleaner in Nixon Falls forever. He will be back one day, along with his pasta sauce, and when that happens a lot will have changed. For one thing he may stay an amnesiac who nonetheless has retained his culinary and fighting skills.

What do you think GH fans, do you ship Jarly? And if so do you want Sonny to continue his relationship with Nina Reeves (Cynthia Watros)? It will be mighty strange to have Sonny back in Port Chuck as a good guy, and perhaps even odder to see him without Carly on his arm!

The Young And The Restless Comings And Goings: An Old Friend Returns To Shake Things Up!