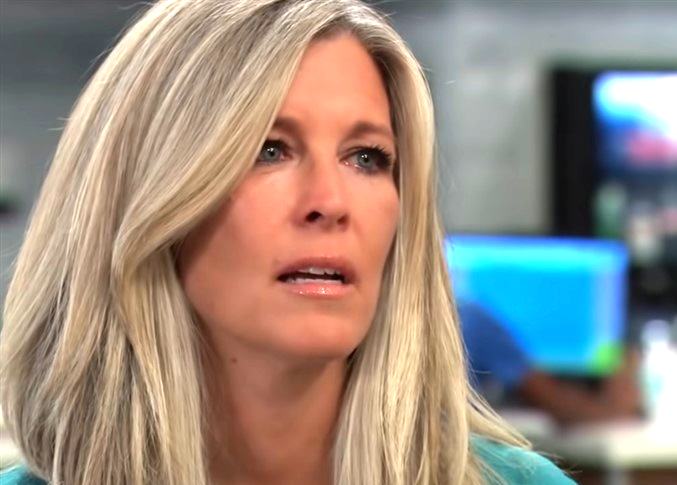 General Hospital viewers will recall that it has been several months, and possibly close to a year, since Sonny disappeared in the icy waters of a river straddling the state line of Pennsylvania and New York. Sonny had been in a fight with Julian Jerome, (William DeVry) and the footbridge they were on broke underneath them, Julian’s body surfacing, Sonny’s never having been found. General Hospital viewers know that Sonny, minus his suit coat with all his identification and phone, wound up nearly frozen in a snowbank near Nixon Falls, Pennsylvania and was found and taken to the clinic where Phyllis Caulfield (Joyce Guy) works.

General Hospital viewers will recall that he’s been living his life as “Mike” ever since. Carly had to make the traumatizing decision to have Sonny declared dead fairly quickly, since the Corinthos family was in the midst of a turf war with Cyrus Renault (Jeff Kober). Now that they remain in a turf war with the Novak Family, who has sent a few “messages” including the destruction of a Corinthos Coffee warehouse in Port Charles, Carly and Jason Morgan (Steve Burton) have made the decision to marry. Neither are really doing so for romantic reasons, but for “business” and possibly for survival! Perhaps the finality of it all with her marrying Jason has gotten to Carly, and she talks to her former aunt by marriage, Laura.

Longtime General Hospital viewers will recall that Laura is no stranger to mobsters and having to do what it takes to deal with them! Years ago, General Hospital viewers will remember that Laura and Luke Spencer (Anthony Geary) ran from mobster Frank Smith (George Gaines) for years. Luke had done some things for Smith and the mob in Port Charles at the time but he wanted out, and as Julian Jerome, among others, have found out over the years that’s not an easy thing to do! It was during those years that Luke and Laura made friends with Sonny Corinthos and had been friends ever since.

It is also why Laura has tended to look the other way sometimes at some of Sonny’s more criminal activities, although she’s given him friendly warnings from time to time! Sonny never ran from the mob and he has certainly been part of it but his activities and businesses in Port Charles are legal – his “other businesses” are mainly casinos in Puerto Rico. Carly knows once she marries Jason there is no going back – and it’s like the end of an era for her; the era of Sonny. She vents her grief to Laura as she talks over her years with Sonny and how she can’t believe he is “gone”. Laura’s never been widowed but she understands Carly’s grief and how the marriage to Jason feels like “moving on” even if it really is not. Laura understands the marriage and why it has to be done, and she misses Sonny, too.

The Bold And The Beautiful (B&B) Spoilers: Brooke About To Change Her Own Life