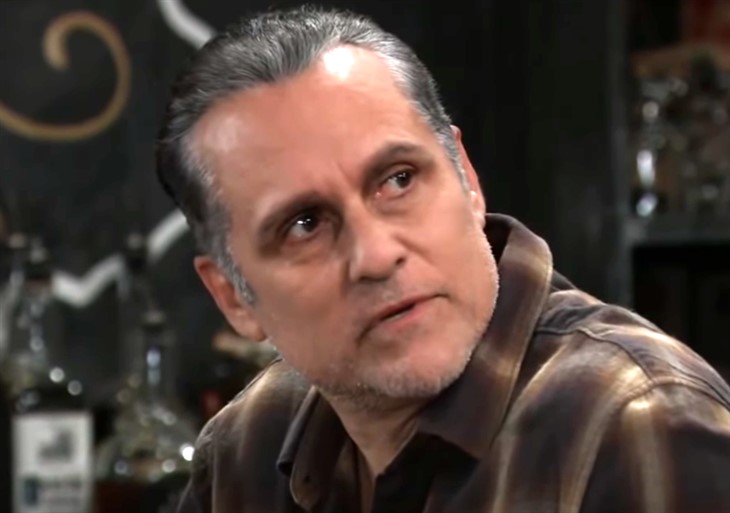 General Hospital (GH) spoilers for Wednesday, July 7, 2021, reveal Sonny missing Nina a whole lot and Phyllis having the perfect idea for how to remedy that problem.

General Hospital Spoilers – Will Sonny Corinthos Do What Phyllis Wants?

Nina (Cynthia Watros) has settled back into her Port Charles life easily. She’s back behind her desk at Crimson, attending parties, visiting friends, getting to know her grandson. It’s like she never left. Except she misses Sonny (Maurice Benard) — the man she calls ‘Mike’ — and Sonny misses her. Phyllis can see how Sonny feels so she does her best to convince him to go to Port Charles and surprise Nina.

When Lenny suggested this before, Sonny was hesitant because he wanted to give Nina space with her grandson, plus he thought she’d be back already. Now that it looks like Nina may not return any time soon, GH spoilers tease Sonny might change his mind, which is something that needs to happen before Carly (Laura and Wright) and Jason (Steve Burton) do something totally insane like marry one another.

Speaking of Jason and Carly, spoilers say that Liesl (Kathleen Gati) is heartbroken on Wednesday. Does that mean she learns that Britt (Kelly Thiebaud)and Jason no longer have a future?

Monica (Leslie Charleson) was surprised to see that Maxie (Kirsten Storms) was back again and couldn’t take her eyes off that baby. After seeing how attached Maxie is becoming to little Bailey Louise, Monica is more alarmed than ever and cautions Brook Lynn (Amanda Setton) that she has to stop letting Maxie see the baby. Does she also warn her not to bring the baby to work with her at Crimson since Maxie will be there? Or will Monica be the first one to catch onto the truth — especially if she ever overhears Maxie and Brook talking?

Sam (Kelly Monaco) had her fun on the Fourth of July burning things Jason after learning Jason would marry Carly. On Wednesday, Dante (Dominic Zamprogna) lends her a sympathetic ear and shoulder to lean on. Will one thing ever lead to another with these two?

And finally, Joss (Eden McCoy) and Cam (Will Lipton) reach a new understanding about their relationship and agree to put the past where it belongs — in the past.