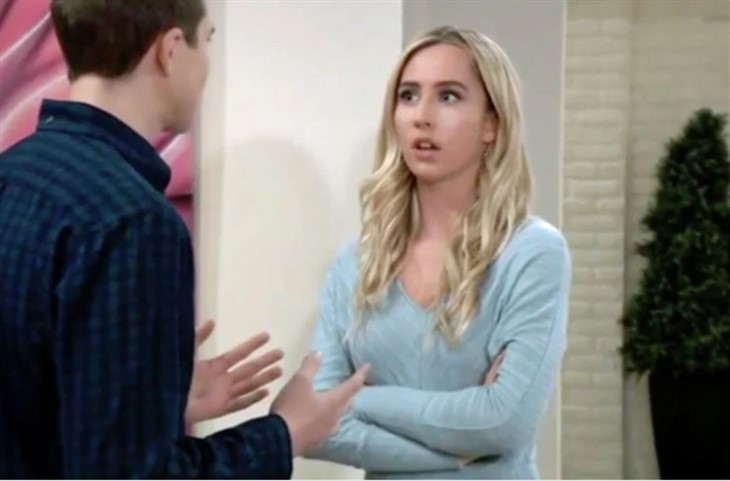 General Hospital (GH) spoilers say that while there’s nothing like young love, this is not the kind of love – or loss – that anyone expected. When Cameron Webber (William Lipton) drops by Josslyn Jack’s (Eden McCoy) in the hopes that the two of them can reconnect as friends, he’s disappointed to find out that it’s not going to happen. That’s because she realizes that he’s still convinced that it was Jason Morgan (Steve Burton) who had killed Franco Baldwin (Roger Howarth) and of course, they have a major blow up over it. Read on for all of the latest spoilers.

General Hospital Spoilers – Cameron Webber Walks Out On Josslyn Jacks – But For How Long?

The two want to be friends again, but because of everything that has happened these last few weeks, it’s just not going to happen, seeing how they are on polar opposites over Franco’s death. Cameron doesn’t want to hear any of it, but Josslyn is concerned over him wanting to make Jason pay for a crime that she doesn’t believe he committed.

General Hospital spoilers say that Joss makes it pretty clear to Cameron that she won’t choose between him and Jason, who has always been a best friend to her mother Carly Corinthos (Laura Wright). This in turn infuriates Cameron.

Cam says that he always chooses Joss no matter what. Eden McCoy, who plays Josslyn on the hit ABC soap, puts it this way to Soap Opera Digest in a new interview, “But Joss hasn’t even made him choose between her and someone that means something to him, and Joss considers Jason her family. Ultimately, Cam walks out on Joss, who fears she’s lost her lifelong friend for good.”

In other words, Josslyn’s loyalty to Jason could cost her the same kind of friendship that she has with Cameron. Now whether or not Cameron goes along with this remains to be seen. Of course, General Hospital fans will have to tune in for all of the action each and every day!