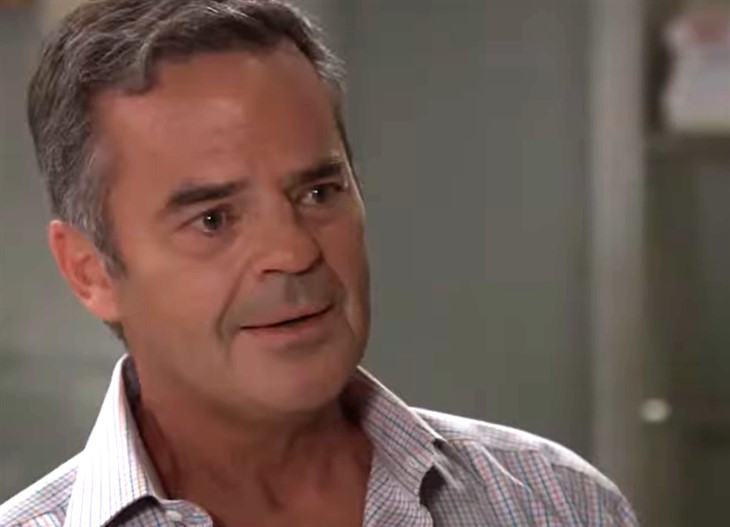 General Hospital viewers will remember that Brook Lynn had a very spur of the moment one night stand with Valentin Cassadine (James Patrick Stuart) several months ago. Then she left for a while, to spend time with her mother in Bensonhurst, but before she left she was shown with a positive at-home pregnancy test. Now she has come back to Port Charles several months along and her father is demanding an explanation!

Ned doesn’t understand why her mother, Lois Cerullo (Rena Sofer) hasn’t contacted him about Brook Lynn’s pregnancy! Brook Lynn is far enough along there is no hiding the truth and Ned wants to know who “knocked her up”! Olivia Quartermaine (Lisa LoCicero) will be shocked as well and will want to know who the father is and what the circumstances were surrounding her pregnancy. Even if Olivia and Ned are on the outs, she will still be concerned about Brook Lynn and her baby!

Brook Lynn will come up with an explanation all right but she sure won’t tell anyone she spent the night with Valentin Cassadine a few months ago! Valentin will see her and be shocked as well, but she will not admit to him that he is the father either. More than likely she will tell her Port Charles family and friends that she had a boyfriend in Bensonhurst and it was private – she didn’t tell Lois, either!

If she tells Ned that the boyfriend in Bensonhurst was a secret and Lois didn’t know about the boyfriend or the pregnancy, his suspicions will really go through the roof! Ned tells her he just wants to make sure that sleazy producer hadn’t gotten to her again and had his way with her – Brook Lynn assures him he’s long gone. She would have never given in to him, and besides, when she left town she couldn’t sing anyway due to the damage to her vocal cords caused when Nelle Benson (Chloe Lanier) slit her throat!

General Hospital Spoilers: Terry Randolph Apologizes To Liz For Not Being Able To Do More To Save Franco https://t.co/kDuwVOVVWG

That is finally all healed but she hadn’t been trying to sing all that much since. It pains her since her music was her life, but there was nothing she could do further according to the doctors except just give it time to heal. Ned sits down and asks Brook Lynn to sit down. He wants to know if she had heard about what happened with The Floating Rib and what happened to “Dusty” Dustin Phillips (Mark Lawson) her old friend. Brook says sadly, yes, that actually Laura Collins (Genie Francis) contacted her while she was in New York City getting Lulu Spencer (Emme Rylan) settled in her medical facility and had been kind enough to tell her about Dusty. Brook Lynn is a little upset that Ned didn’t contact her but what’s done is done! Brook Lynn continues to tell Ned that the baby is a boyfriend’s in Bensonhurst, he doesn’t know, and she doesn’t want him to know! Ned is still skeptical, but that’s her story and she’s sticking to it!

How Many Reality TV Appearances Has 90 Day Fiancé Star Yara Zaya Made?