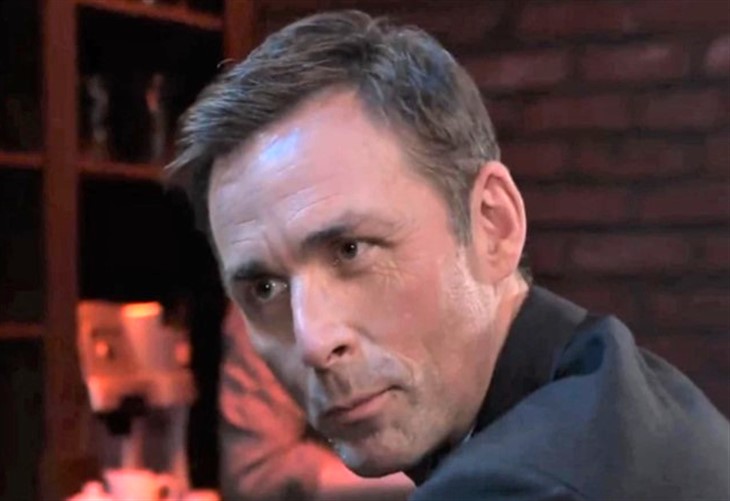 General Hospital (GH) spoilers tease that in Port Charles, NY Brook Lynn Quartermaine (Amanda Setton) will be returning to General Hospital soon. However, Valentin Cassadine (James Patrick Stuart) will be in shock when he sees her for the first time in months and she’s very pregnant!

General Hospital viewers will remember that Valentin and Brook Lynn, then played by Briana Lane while Amanda Setton was on a real life maternity leave, had a one night stand shortly before Brook Lynn left town. She has been staying with her mother in Bensonhurst, New York to get some time away from the tumultuous Quartermaine family and all their dysfunctional behavior. But before she left, she and Valentin had a one night stand and shortly thereafter she took a pregnancy test which was positive!

It sounds like Brook Lynn may have had more than one reason to leave town, but she isn’t hiding anything when she returns, including her pregnancy! This will be at a very inconvenient time for Valentin, who is getting closer with Nina Reeves (Cynthia Watros) again, even though he hasn’t made any overt moves in the romance arena just yet. Valentin knows Nina has to trust him as a friend before she could ever trust him as a boyfriend or husband, although that certainly seems to be his end game!

Valentin will be in shock when he realizes that Brook Lynn’s baby very likely is his! He wasn’t involved with Nina at the time, and Nina was involved with Jasper “Jax” Jacks (Ingo Rademacher) so it isn’t like he would have been cheating on Nina. However, now that Nina seems to have kicked Jax to the curb and is getting closer with Valentin, Brook Lynn’s pregnancy with Valentin’s baby could throw a monkey wrench into things in more ways than one!

Nina so far has shown no signs of the obsessive behavior that drove her to put Ava Cassadine, then Ava Jerome (Maura West) into labor and run off with her baby! Longtime General Hospital viewers will remember that was when she was involved with Franco Baldwin (Roger Howarth) and he followed her to Canada where the two of them cared for newborn Avery Corinthos-Jerome (Ava and Grace Scarola) for a time. He eventually convinced her that what she had done wasn’t right, and they came back from Canada and Avery was rescued. Nina then spent some time in Shadybrook, and Franco injected himself with LSD to protect her from his mother, Heather Webber (Robin Mattsson) who he felt was a threat.

General Hospital Spoilers: Maxie Jones Sets Out To Get Revenge, Who Will She Make Pay? #GH #GeneralHospital

Franco got himself into Shadybrook that way. But now, with the death of Franco hitting her in the heart even though they have not been involved in a long time, and the knowledge that the long-lost daughter she had longed for is dead, coupled with the Corinthos family denying her access to Wiley Corinthos (Erik and Theodore Olson), could Nina go cray-cray again?

Valentin knows all her history and may wonder if Nina would try the same thing with Brook Lynn as she did with Ava if she knows she is carrying his baby! The thing that drove Nina to take Avery was that Silas Clay (Michael Easton) was Kiki Jerome’s (Haley Erin) father and therefore Nelle’s father too. She could twist things around and think she has rights to a baby of Valentin’s, her most recent ex-husband as well! Valentin will have to keep a close check on Nina and potentially need to protect Brook Lynn as well!