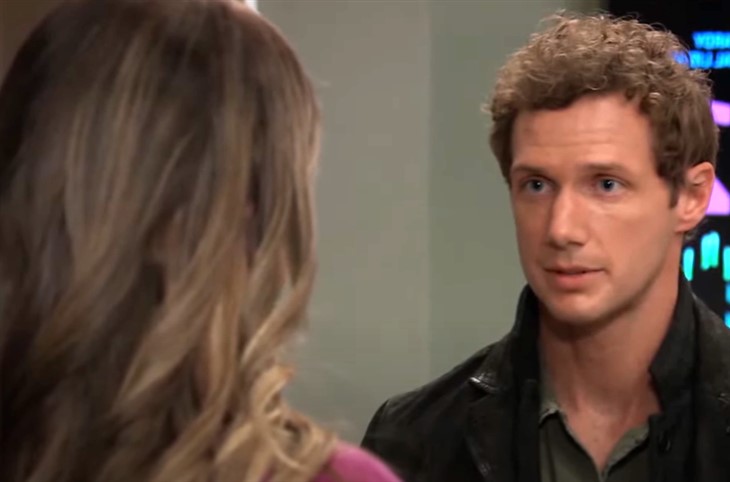 General Hospital (GH) spoilers and updates reveal Brando Corbin (Johnny Wactor) and Sasha Gilmore (Sofia Mattsson) may need each other. Sasha came to Port Charles in order to pose as Nina Reeves (Cynthia Watros) daughter. Valentin Cassadine (James Patrick Stuart) wanted Nina to have the daughter that she lost. Sasha met and got into a relationship with Michael Corinthos (Chad Duell).

He helped her be able to tell Nina the truth. Sasha and Michael stayed a couple until Michael needed to get custody of his son Wiley Quartermaine-Corinthos (Theodore and Eric Olson) from Nelle Benson (Chloe Lanier). Brando came to Port Charles to find his mother Gladys Corbin (Bonnie Burroughs). He ended up saving Carly Corinthos (Laura Wright) from an attack orchestrated by Cyrus Renault (Jeff Kober). Brando helped the Corinthos family by posing as Dev Cerci’s (Ashton Arbab) father so that he could stay in the country. Brando lost Dev when Cyrus had the Floating Rib bombed. He has been working undercover for Cyrus.

Brando has been trying to find a way to bring down Cyrus. He met Sasha when she was having a difficult time. She and Harrison Chase (Josh Swickard) faked an affair to get Michael and Willow Tait (Katelyn MacMullen) to break up with them. General Hospital Sasha and Chase thought that it would help Michael and Willow to get custody of Wiley from Nelle. The plan worked but Sasha was left broken hearted. She started to turn to drugs. Cyrus gave Sasha an experimental drug that put her in the hospital. Brando helped Sasha recover from the overdose.

General Hospital Currently Brando is concerned about his mother who has gotten in over her head with Cyrus and Peter August (Wes Ramsey) . She is the eye witness to the death of Franco Baldwin (Roger Howarth). Cyrus wanted to frame Jason Morgan (Steve Burton) for the crime because he wants to get his mother Florence Grey (Annie Abbott) back from Jason and Carly. Brando is concerned that Gladys will get hurt by Cyrus or Peter who did kill Franco. Brando needs someone to confide in about his worries. Brando and Sasha had gotten close. Could he tell Sasha about his concerns? Can Sasha help Brando with his mother?

Sasha has been trying to repair her relationship with Michael. Michael found out that Sasha and Chase had staged the affair when Sasha had her overdose. Michael was grateful for what Sasha and Chase did because he was able to get custody of Wiley. However he and General Hospital Willow had started to become a real couple. Willow and Michael decided that they would try to reconnect with Chase and Sasha. Michael has feelings for both Sasha and Willow. Sasha wants Michael to be happy and knows that Willow and Wiley make him happy. Sasha may decide that Michael and Willow need to be together. Brando was a friend to Sasha before when she did not have Michael. Could Brando help Sasha to deal with losing Michael again?

General Hospital Spoilers: Will Elizabeth Webber Have A Change Of Heart About Jason Morgan? https://t.co/OxGbKBqnJi pic.twitter.com/TgjJXk5TYE

General Hospital Brando and Sasha may need to come together to solve their problems. Brando could help Sasha to cope with the loss of Michael so that she would not turn to drugs again. Sasha could help Brando find a way to protect Gladys from the danger that she is in. Could Brando and Sasha become more than friends as they help each other with the difficulties that they face? Tune into General Hospital to find out how Sasha and Brando overcome the challenges in their futures.

Royal Family News: Meghan Markle Not ‘Wearing Handcuffs’ When She Was Living It Up at the Palace