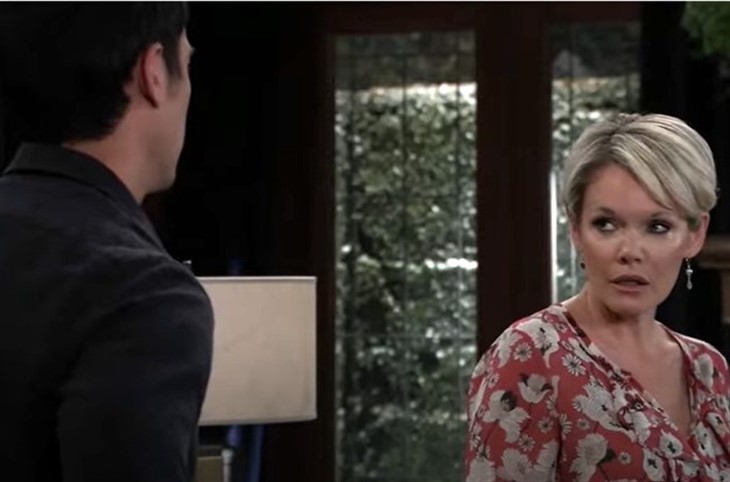 General Hospital spoilers and updates reveals Ava Jerome Cassadine (Maura West) and Nikolas Cassadine (Marcus Coloma) have a good life together. They did not know if they wanted to be together. Ava and Nikolas tried to get each other to cheat with Franco Baldwin (Roger Howarth) and Elizabeth Webber Baldwin (Rebecca Herbst) in order to get the Cassadine fortune. However their plan failed when Liz and Franco figured out what they were doing. Ava and Nikolas nearly lost their friendships with Franco and Liz over their plan. Recently Liz lost Franco. Now Ava and Nikolas have a chance to help Liz with her loss.

Franco had been diagnosed with a cancerous brain tumor. Liz thought that Franco might recover from the cancer. However Franco was fatally shot by Peter August (Wes Ramsey). Liz has been devastated by the loss. The rest of her family has been devastated as well. Liz has three sons that were close to Franco. Cameron Webber (William Lipton), Jake Spencer (Hudson West), and Aiden Spencer (Jason David) had plans that they wanted to do with Franco. Ava and Nikolas put together a touching tribute to Franco at Ava’s art gallery. She displayed the artwork that Franco’s patients had done in art therapy. It helped Liz and her sons to see the tribute.

Now Ava can be a friend to Liz. Ava and Franco had been friends for a long time. They had been in a relationship. Franco believed that he was the father of Ava’s daughter Kiki Jerome (Hayley Erin). Franco was saddened to find out that Kiki was not his daughter. Liz and Franco helped Ava when Kiki was killed. Now Ava can help Liz with losing Franco. Ava runs an art gallery. Franco had been a controversial artist. Ava can help Liz with her finances by selling some of Franco’s past artwork. Liz wanted to be an artist but became a nurse. Ava could help Liz to become a well known artist by showing her work at her gallery. Ava can be a friend to Liz because she cared about Franco as much as Liz did. Can Ava help Liz find a way to overcome the loss of Franco in different ways?

Nikolas and Liz had been a couple at one time. However they became friends. Nikolas did not know if Franco was the right person for Liz but came to see how much he loved her. Nikolas knows that Cameron, Jake, and Aiden loved Franco. Nikolas could help Liz’s sons by being a friend to them. Nikolas has a son Spencer Cassadine (Nicolas Bechtel) that he loves. Spencer and Nikolas have been estranged for a while. Nikolas had stayed away after everyone thought he had been killed by Valentin Cassadine (James Patrick Stuart). Spencer was upset that Nikolas had not let him know that he was alive. Nikolas could be a sort of father figure to Cameron, Jake, and Aiden. Spencer may want to come help Nikolas to help them. It might help to bring Nikolas and Spencer together. Can Nikolas help Cameron, Jake, and Aiden to deal with their loss?

General Hospital Spoilers And Rumors: Sonny Thinks Nina Is His Wife, Will She Tell Him The Truth? #GH #GeneralHospitalhttps://t.co/FWBwasD1ZP

General Hospital Ava and Nikolas can be the support the Liz and her sons need at this time. They can help them to find a way to rebuild their lives without Franco. Can Ava help Liz to find a new path? Will Liz and Ava become friends? Can Nikolas help Cameron, Jake, and Aiden to find a way to be without Franco? Tune into General Hospital to find out what Ava and Nikolas will do to help Liz and her sons.