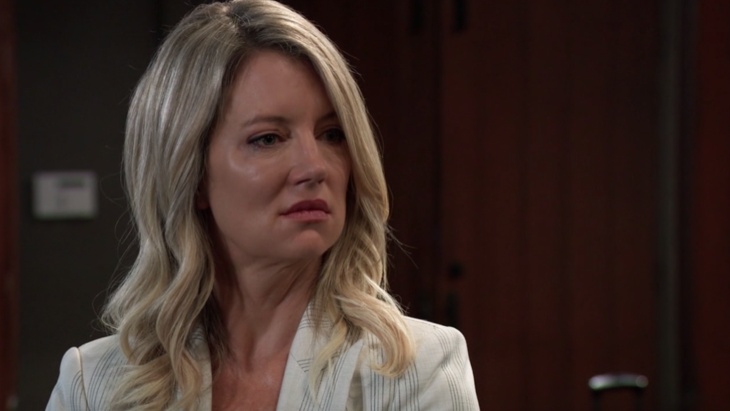 General Hospital (GH) Spoilers tease that Sonny Corinthos (Maurice Bernard) has finally surfaced, and as fate would have it, he staying with someone with ties to Port Charles! Although Phyllis Caulfield (Juliette Jeffers) didn’t mention Nina Reeves (Cynthia Watros) by name, that she was Phyllis’ patient that had been in a coma for twenty years. In fact, Phyllis visited Port Charles to answer Nina’s questions about her long-lost daughter.

Although Nina was in a coma during the time Phyllis was caring for her, it was obvious that Phyllis cared quite a bit for Nina. Although has given up the search for her missing daughter, for the time being, there is always the possibility that more questions will pop up. Nina may very well decide that she needs to talk to Phyllis again. And if she does, it likely that she may see the missing Sonny! Phyllis is letting Sonny stay with her and her husband while he tries to get his memory back.

GH Spoilers – Nina Reeves Would Certainly Tell Sonny Corinthos Who He Really Is, Or Would She?

Circumstances being what they are, there is little reason to believe that Nina wouldn’t bring Sonny back to Port Charles with her. But if sometime in the very near future, Nina discovers that both Carly Corinthos (Laura Wright) and Jasper “Jax” Jacks have kept the fact her long lost daughter was actually the now deceased Nelle Benson (Chloe Lanier) a secret from her, Nina could very well decide to keep Sonny’s whereabouts a secret. What better revenge on Sonny’s wife than to keep Carly in the dark.

General Hospital Spoilers – Could Sonny Corinthos Be Coming Home Sooner Rather Than Later?

But as long as Nina doesn’t know about Carly and Jax’s secret, if she does decide to pay Phyllis a visit, she may very well be the person that brings Sonny home. But that’s assuming that Sonny is ready to come home. Without his memory, he may feel safer just where he is. All signs to Sonny being without memories at least for the time being, so even if Nina finds him, he may not be ready to come home?

Will Nina find Sonny while visiting Phyllis? Will she bring Sonny home? Does he even want to at this point? And when will remember who he is? There’s always a lot of drama in and around Port Charles, so stay tuned to General Hospital airing weekdays on ABC. And don’t forget to check back right here regularly for all your General Hospital news, information and spoilers!