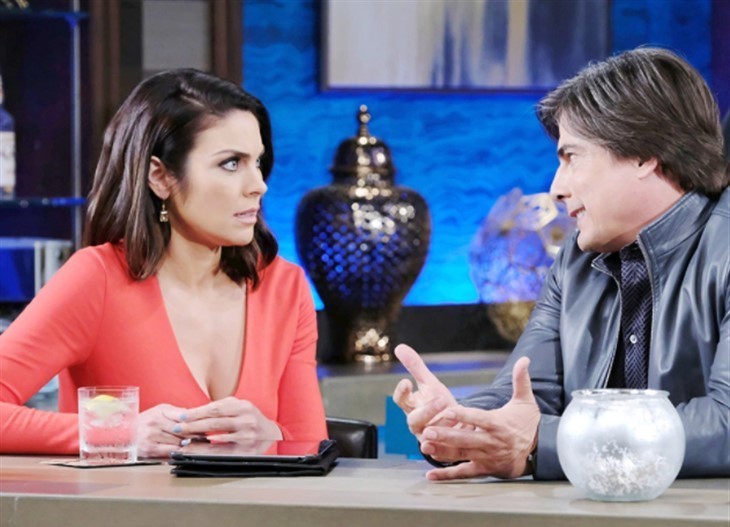 Days of Our Lives (DOOL) spoilers tease that Chloe Lane (Nadia Bjorlin) is currently navigating drama from both Phillip Kiriakis (Jay Kenneth Johnson) and Brady Black (Eric Martsolf). Chloe has always remained friends with most of her exes, so once she returned to Salem she reconnected with both men. But both of them have possibly brought great danger to Chloe.

Days Of Our Lives Spoilers – The last thing Chloe Lane Would Ever Want Is To Be On Kristen DiMera’s Bad Side!

As DOOL soap opera viewers know, Kristen DiMera (Stacy Haiduk) is currently serving time in prison for stabbing Victor Kiriakis (John Aniston) and leaving him for dead. Truthfully, this is the first time that Kristen has actually taken responsibility for her actions and voluntarily surrendered even though it meant leaving her true love Brady, as well as the daughter she has waited her entire life to have. Brady is still completely committed to Kristen while she serves her time, but an innocent kiss may change everything for Brady and Kristen!

Chloe and Brady spent New Years Eve together and at midnight, they shared a kiss. But it wasn’t meant by either of them in a romantic way, but Kristen’s jealousy and obsessive personality caused her to lash out at Brady. Brady was able to calm Kristen down and convinced her, at least for the moment, that he isn’t involved romantically with Chloe. But Kristen won’t be able to let go of her jealousy and it won’t be long before she decides to make Chloe pay. Needless to say, Chloe won’t be happy to be on Kristen’s bad side. Hopefully, Kristen can resolve her anger before anyone is seriously hurt.

Days Of Our Lives Updates & Spoilers – Phillip Kiriakis Is Just As Much Of A Trouble Magnet As Brady Black!

But it’s not like Phillip has any less drama than Brady at the moment. Because Phillip acquired a very large gambling debt, and he had no choice but to let the mob, namely the Vitale family, cover his debt. But in order to pay the debt back, Ava Vitale (Tamara Braun) forced Phillip to launder her mob earnings though Titan Industries. Phillip was successful for quite awhile, but once Xander Kiriakis (Paul Tefler) figured out what Phillip was doing, the Vitale took their money out of Titan, but Phillip still owes a debt and he may just pay with his life, or even worse, Chloe’s.

New DOOL Spoilers – There’s Much Better Men Out There For Chloe Lane!

There is another man that Chloe has a history with who wouldn’t actually put Chloe’s life in danger just by being around them. It wasn’t all that long ago that Lucas Roberts (Bryan Datillo) and Chloe were happy together. They parted ways when Lucas left Salem to help deal with Allie Horton’s (Lindsay Arnold) issues with drinking. But truthfully, Chloe should make a beeline away from the Kiriakis men and see if there is still chemistry with Lucas. Lucas may not lead as an exciting life as Phillip or Brady, but at least for now being with Lucas won’t put Chloe in any kind of danger!

Days Of Our Lives (DOOL) Spoilers: Ben Gets A Sign, Ciara’s Message Leads To Life-Saving Rescue?https://t.co/HPDsdDeeNJ

Future Days of Our Lives Spoilers – What Do You Think?

Between Phillip and Brady’s drama, will Chloe survive the winter? Will Chloe realize that they are both more trouble than they are worth? Could Lucas still have a chance to win Chloe’s love once again? Could Chloe and Lucas finally get it right this time? Shady exes are around every corner in Sales, so stay tuned to Days of Our Lives airing weekdays on NBC. And don’t forget to check back right here regularly for all your Days of Our Lives news, comings and goings information and DOOL spoilers!