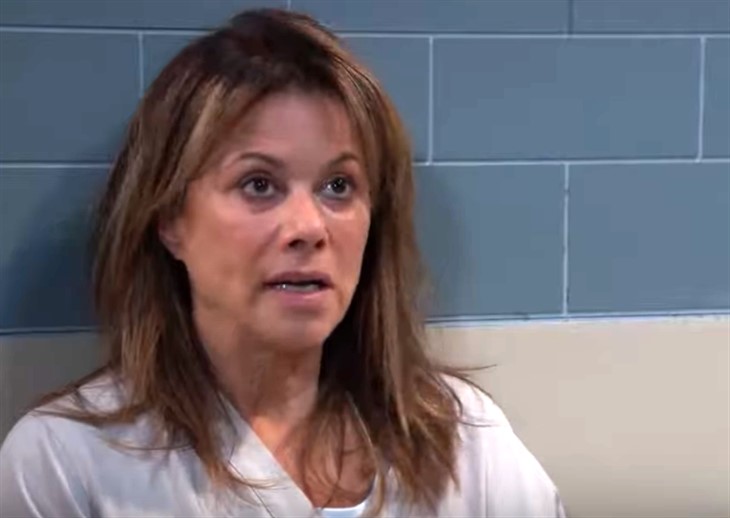 General Hospital Spoilers tease that Alexis Davis (Nancy Lee Grahn) was surprised to run into serial killer Ryan Chamberlain (Jon Lindstrom) in her new prison Springridge. Ryan had been a prisoner inside Pentonville until Cyrus Renault’s (Jeff Kober) ordered a hit on Ryan. Ryan was stabbed in the back and although he survived, it seems as if the damage was done. Ryan is now unable to move, although he is completely lucid and aware of his surroundings, Since he was no longer a threat, Ryan was transferred to a prison that was lee secured. But some people don’t believe Ryan is as helpless as he appears, if he ever was.

General Hospital Spoilers – Alexis Davis Believes Herself To Be Safe From Ryan Chamberlain!

Meanwhile, across town at Wyndemere, Nikolas Cassadine (Marcus Coloma) and Ava Jerome (Maura West) started receiving creepy gifts. The “gifts” weren’t violent in and of themselves, but the implication that Ryan was somehow behind each prank made the couple take the threats seriously. Ryan is obsessed with Ava and the last time he was on the loose he murdered Ava’s daughter, Kiki Jerome (Hayley Erin) and then made love to Ava that same night. But Alexis believes that the Ryan sitting in a wheelchair before her is trapped within his own body. But Alexis should take care not to underestimate Ryan’s genius.

GH Spoilers – Does Ryan Chamberlain Have A Helper That Wants To Take Up His Cause?

And although it’s been revealed that the Stalker was actually Spencer Cassadine (Nicholas Chavez), no one has figured that out yet. But the pranks still seem more like something Ryan would do, not Spencer. Viewers may remember a few months ago, it was revealed that Ryan has someone to help him read his mail, and a communication attempt was made at some point from Ryan to Spencer, although that letter was returned to sender. Perhaps Ryan’s helper is not only reading Ryan’s mail, but has also helped connect Spencer to Ryan. This third party could have relayed Ryan’s orders to Spencer. Or it’s even possible that Ryan has recovered, but kept that secret.

General Hospital Spoilers – If Ryan Chamberlain Is Faking His Paralysis, Look For Him To Begin His Next Hunt!

Judging by how awful she was to Ryan, if he has indeed recovered, she has just made a most dangerous enemy. And so it will become a battle of the mind, but Ryan’s games always end the way, so if Alexis wants to live in her new found prison, she should at least pretend to be cordial in Ryan’s presence. But that’s certainly not Alexis’ style, so look for Ryan and Alexis to contine this cat and mouse game until Alexis can get proof that Ryan can move or until Ryan has murdered Alexis. But either way, it seems Alexis has found yet another cause to keep her occupied while she serves her time.

Was Alexis a tad too overconfident the way she talked to Ryan? Or is he still helpless inside his own mind? Will Alexis find herself in a game of cat and mouse with Ryan? If Ryan has been faking, how long has it been going on and what horrible things could he have done under everyone’s noses. Egos run rampant in Port Charles so stay tuned to General Hospital, airing weekdays on ABC. And don’t forget to check back right here regularly for all your General Hospital news, information and spoilers!