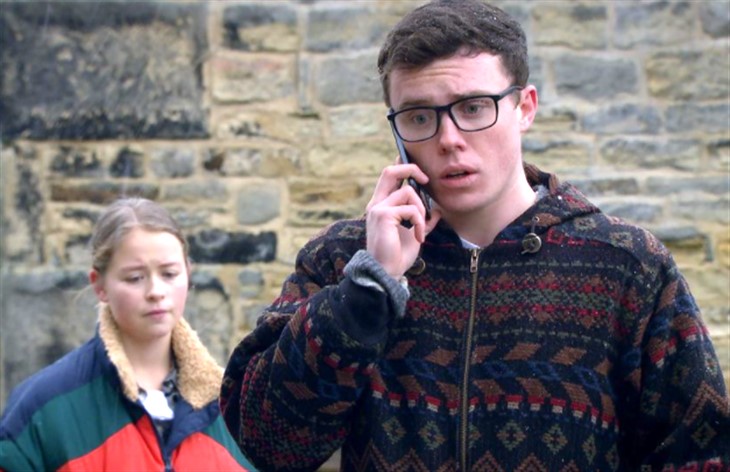 Emmerdale spoilers and updates reveal Liv Flaherty (Isobel Steele) faces a hard assignment on its episode on April 5 as Mandy Dingle (Lisa Riley) pleads to help her in convincing Vinny to face the truth about Paul Ashdale (Reece Dinsdale).

In the last week’s wedding stunt, Paul has viciously beaten Vinny first before his death at the explosion. The villain has been beating the child with his series of blowups for the last episodes, but Paul’s latest outburst has caused Vinny to be hospitalized due to internal bleeding.

Last Monday’s episode shows Mandy being filled with hatred for Paul after knowing his true nature. She focuses her concerns and attention now on Vinny, who is lost in his broken world. Mandy was shattered to see his son covering the truth just so his late father’s image won’t be tainted.

After realizing that her attempts are backfiring, Mandy pleads with Liv to talk to Vinny, hoping her son will listen to her because the teens have been close over the past year.

The series has proven Vinny’s character to forgive his dad a thousand times. Even after all the abuse that Paul has done to him physically and emotionally, this young man wants to choose his memories of him, highlighting only the good things he remembers about his late dad.

Vinny is a broken man at the moment and is confused about how to respond. He also just recently ruined his relationship with Liv. His first reaction to Liv’s attempt was to push her off away.

Vinny is having a hard time healing from the wounds his late dad has left him, but ironically he was quick to forget and deny the negative stuff Paul has left behind.

Isobel has been portraying Liv in Emmerdale for 5 years. She shared the BTS for the barn explosion stunts.

The young actress also shared her gratitude for the series on her Instagram post last February 25. Isobel wrote in her post: “This job has changed my life and shaped me in ways I didn’t think were possible. It can be hard coming into a show that’s so established & well respected but every single person in that building made me feel like I was part of the furniture from day one. It is truly a very special place to be and I feel very grateful to not only have been given this opportunity to learn and grow up, but to have met all these wonderful people that I wouldn’t have met otherwise.”