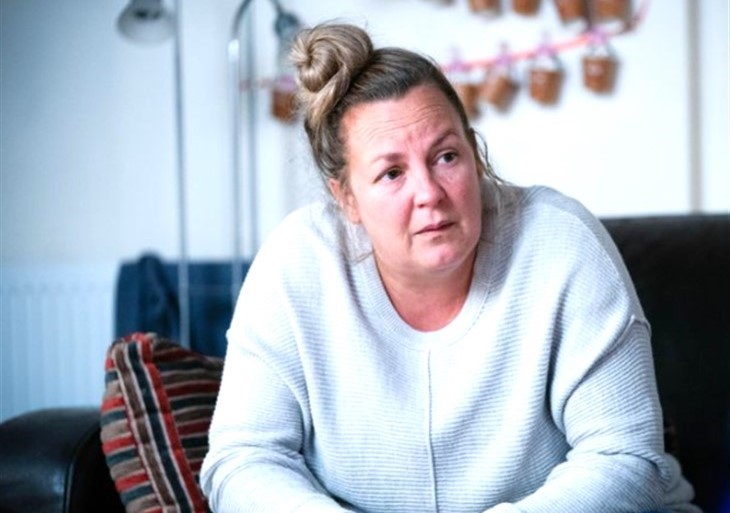 Eastenders spoilers and updates reveal a possible surrogacy story as Karen Taylor’s only hope to get out of debt.

The single mother Karen, portrayed by Lorraine Stanley, will go through an emotional ride in fixing their financial problems. The character has dreaded her future after being terminated from her job at the launderette and missing out on the opportunity of receiving a redundancy payout following a misunderstanding with her boss.

Meanwhile, Karen’s daughter, portrayed by Clair Norris, was flustered after seeing Molly again, a newcomer, looking for his lost dog.

Molly searched for Bernie to apologize for how things ended last time. In return, he offers her Ziggy to cheer up Bailey, who grew fond of the dog. Molly then asks Bernie out for a drink.

It’s obvious how Bernie fell for Molly, but when she’s about to relay her date to her mother in The Vic, they overhear a conversation between Rainie (portrayed by Tanya Franks) and Stuart (Ricky Champ) about looking for a surrogate again.

EastEnders Spoilers – A Series Of Misfortune

Karen faces another threat when she gets a call from someone asking for the money she owed. She went home only to witness how things have escalated to worse quickly as their house has been trashed out and vandalized with a threat to pay as soon as possible.

Mitch realizes it is loan sharks that probably made the move. Karen panics as she thinks about solutions. She then remembers the conversation between Rainie and Stuart and considers being the surrogate mother in return for cash, but Bernie does not approve.

Fans are now wondering if Bernie will step instead as the surrogate mother.

EastEnders Spoilers – Away From troubles

“EastEnders” main characters have participated in BBC’s East-Eggers 2021. The characters were seen having fun in the game. In the end, Lorraine won the egg hunting with 26 points, followed by Maisie-25, Roger-23, Maddy-22, Zack-22, and James-15. In her “winning speech” the actress said: “I’d just like to thank my mum and dad for making me. I’d like to thank my co-star, Roger Griffiths. Thank you. This means everything.” to which Roger replied, “Well done, my darling.”

Lorraine Stanley is an actress and producer, famously known for Suffragette (2015), Legend (2015), and the long-running EastEnders (1985). She won the Best Newcomer Award at the British Soap Awards, together with other eight actors in EastEnders. The star considers her role and performance in London to Brighton in 2006 as her best work.