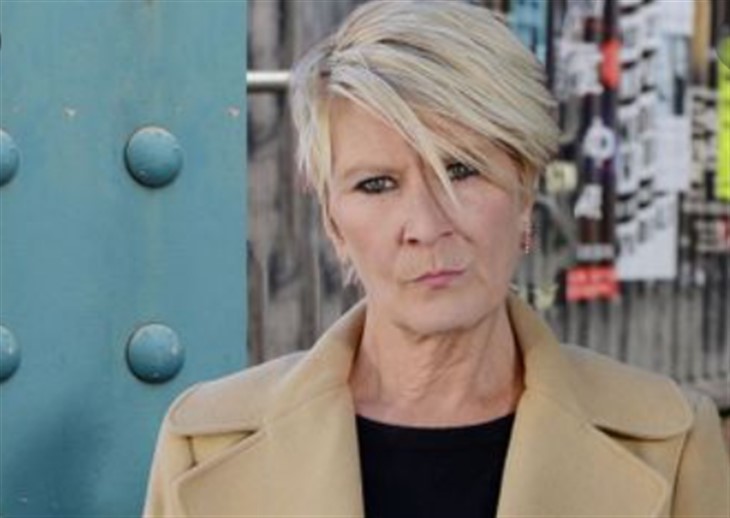 Eastenders spoilers reveal that Katy will confront Mick over the police coming after her at the beginning of the week. He denies informing them of her sexual abuse and doesn’t think Frankie Lewis (Rose Ayling-Ellis) did either. Katy tries to manipulate her victim, but gets stopped in her tracks. Mick ends up dropping a few truths on her. Then, they realize that Shirley is nearby and listening to their conversation. She now knows the truth about Katy and what has been really going on with Mick.

Meanwhile, the Carter family is worried that if Tina Carter (Luisa Bradshaw-White) doesn’t show up to her hearing, that it will make her look even more guilty. Of course, viewers know that she has been murdered. Gray Atkins (Toby-Alexander Smith) tries to do damage control by saying Tina “might” contact them. He then sends a text using Tina’s phone.

Later in the week, Gray is upset that Shirley continues searching for Tina. Then, she gets the text that Gray sent from Tina’s phone. Shirley tells Mick about the message, which has them both raising their eyebrows.

Eastenders Spoilers: Gray Likely To Kill Again, Who Will Be Murder Victim #3?

Eastenders spoilers reveal that Ian Beale (Adam Woodyatt) collapses, but Sharon insists that her husband just needs rest. Later, Ian goes to the doctor and Kathy Beale (Gillian Taylforth) bashes Sharon for not informing her about his condition. After they leave, Sharon makes a phone call and unknown to her, it’s overheard. Someone decides to tell Ian what his wife is up to. It looks like her poisoning plot is about to be uncovered. Who overhears her conversation with Phil Mitchell (Steve McFadden) and how will Ian handle the bombshell?

Eastenders spoilers reveal that Linda will be focused on Mick, but she gets confronted by Max. He demands to know why she suddenly dropped their romance. Mick is already struggling with people knowing about him being sexually abused, so will she tell Max the truth or make up an excuse?

Patrick Trueman (Rudolph Walker) will go ahead with his plan convinced that it’s the right thing to do. Phil is confronted about what happened to Lucas Johnson (Don Gilet), but insists that he had nothing to do with it. Plus, Gray continues to have issues with Karen Taylor (Lorriane Stanley) looking after the children. However, his focus is on preventing anyone from realizing that Tina is dead and he is the one who murdered her.