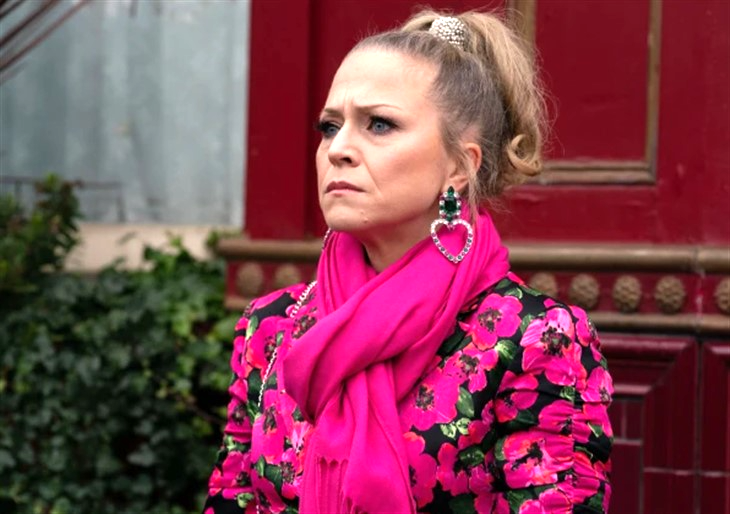 EastEnders spoilers hint that Linda Carter may find herself in some trouble as Rainie continues to try to bring Max back home. Linda and Max had a relationship while Linda and Mick were going through a tough time.

However, Linda put an end to it once she learned that Mick had been abused when he was a child and that he was still trying to deal with the trauma from it. After learning this she stopped things with Max and stayed with Mick. However, her tie to Max did not end there as it seems that Raine is threatening to bring Max back and is going to use Linda’s newborn baby as bait in order to get that to happen.

Linda will soon get a horrible surprise from Rainie as she continues to try to track down Max by using Linda’s newborn baby as bait to get Max out of hiding. EastEnders spoilers indicate Rainie began suspecting that Linda’s baby was Max’s before the baby was born. She then told Jack that she thinks that Max was the father. The truth was revealed to Jack after the baby was born but he decided not to try to tell Max about it but that has not stopped Rainie from talking about it.

EastEnders Spoilers – The Carters Are Not Happy

Rainie is determined to bring Max back to the Square not matter what she has to do in order to make it happen. Viewers saw on the 17th of September that Rainie exposed the secret being kept by Linda and Mick to everyone around. Things won’t stop there as she will continue to insist that Max is the father of Linda’s baby as well as trying to get the attention of Max. Linda however is determined to cover up Max being the father and is making Mick the legal father.

The couple will sign a birth certificate and Linda is determined to not let anyone or anything get in the way of her happy family. However, Rainie is not ready to back down either. This will put both Linda and Mick on edge. Nancy is also not happy to see flyers everywhere saying that Max is the child of her younger sibling. This may cause a war between Rainie and the Carter family. Keep checking Soap Opera Spy for more EastEnders spoilers, news, and updates.