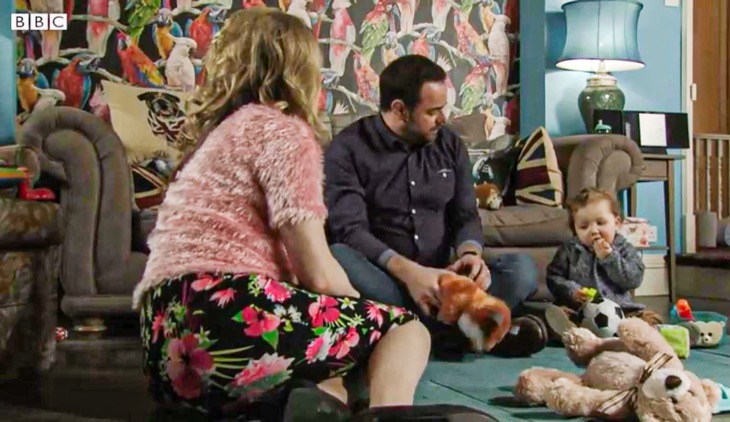 BBC EastEnders spoilers reveal that while Mick Carter (Danny Dyer) and Linda Carter (Kellie Bright) are set to move from the Queen Vic, Ollie Carter’s (Charlie Harrington) teacher could drop stunning news that may rip the family in two.

This danger comes after Mick and Linda hit a rough patch due to her alcoholism. Nonetheless, almost dying in the Queen Vic boat party accident opened Linda’s eyes and together they resolved to start anew.

Will a shattering revelation about their son Ollie put all of that to waste?

Before the accident, Mick defended his wife even though her behavior was troublesome. She insisted she wasn’t an alcoholic and served Mick with divorce papers after thinking he would take Ollie away from her.

Then the parents were called to go to Ollie’s school where his teacher informed them she was worried about his family life at home.

EastEnders Will Air A Spinoff Series and Classic Episodes In Lieu Of New Content https://t.co/xbS6IBe8HP pic.twitter.com/eVS6h6qnQa

Linda thought the other mothers were spreading rumors about her so imagine her surprise when she was told it was her son who had expressed fear of her scary behavior. She had no idea he would verbalize his fears to other people.

At that time she was banned from picking up Ollie from school.

Linda wanted to treat Ollie to his favorite meal but passed out after drinking too much and didn’t hear the fire alarm blaring so Ollie went to the roof to get away from the noise.

EastEnders spoilers – Mick tried to help the situation to no avail

Upon hearing what happened, Mick was understandably furious and forbid Linda from being alone with Ollie. This led to her fear that she would lose him.

Linda came to realize she needed help and the pair decided the best thing to do would be to sell the Queen Vic pub and find another home. To her credit, Linda made sure to apologize to the people she hurt.

Even so, Linda’s relationships with the other school moms is tenuous. Now that Ollie has told his teachers about his mom’s actions, will he once again say something concerning? If so, it is being speculated that this would be heartrending for Mick given that the boy is still impacted by Linda’s issue.

Mick and Linda are tough individuals but could it be that her past actions will continue to reverberate through the family, leading to an unsuspected break?

Royal Watchers Say, Prince Andrew So Toxic He Should Be Seen As Little As Possible