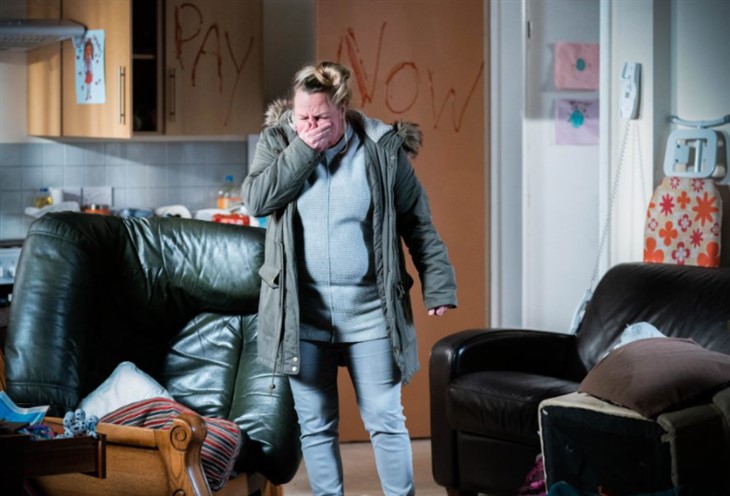 Eastenders spoilers reveal that Karen Taylor (Lorraine Stanley) lost her job. When her boss says he can help her financially, she assumes he wants sex. She humiliates him publicly only to find out that wasn’t the case. To pay the bills, Karen went to loan sharks, who now demand repayment. When they don’t get their money, they leave a diabolical warning in her living room.

Eastenders spoilers reveal that Karen suddenly lost her job. Her boss tried to give her the news gently by inviting her out for a drink. She didn’t think anything of it until Bernadette “Bernie” Taylor (Clair Norris) mentioned that it must be a date. So, Karen got all dressed up thinking the completely wrong thing. That is when she was told that they had to let her go.

Later, Karen was told by her boss that there was a way for him to help her despite losing her job. She came to the wrong conclusion and thought he wanted sex in exchange for money. He blasted him publicly but she was wrong. His wife had encouraged him to give Karen a few months severance, which she ended up not getting because of her antics.

Eastenders spoilers reveal that Bernie tried to give Karen money to help her but her charity was refused. Then, Bernie wanted to buy some food but again, Karen didn’t want the help. It seems that Karen would have been better off just accepting her family’s charity rather than the route she ended up taking.

It is teased that Karen went to loan sharks and now they are demanding to be repaid. Of course, Karen has no money to pay them back. She has no job and didn’t get the severance pay that her boss planned on giving her. Karen will begin to receive threatening phone calls but a bad situation ends up getting much worse. The loan sharks are not going to stop at the phone calls, though. They will make a house call that ends up terrifying Karen’s family.

Eastenders spoilers reveal that Karen and Bernie come home and are shocked by what they find. The loan sharks came into their home and left a threatening warning right in their living room. Then, Mitch Baker (Roger Griffiths) finds out that Karen made a dangerous deal with loan sharks. How will they end up getting Karen out of hot water? Is there any possible way out of this mess? Or will there be painful consequences for Karen and her loved ones? We will have to keep watching the BBC soap to find out what happens with this storyline.