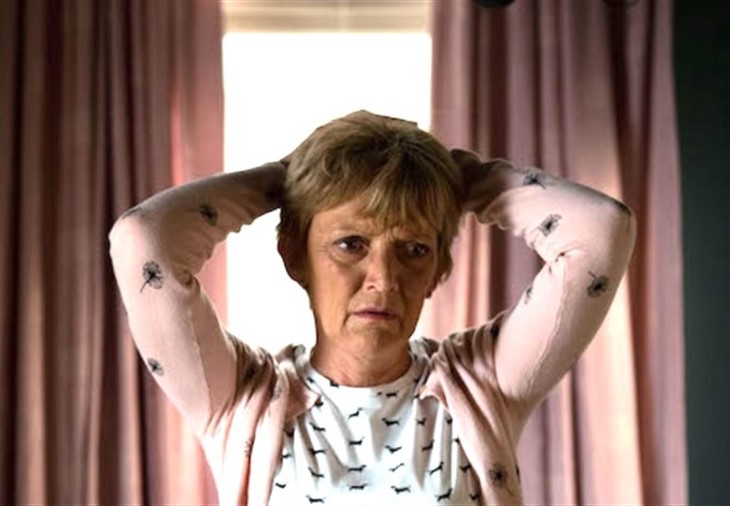 Eastenders spoilers reveal that in Walford Stacey Slater (Lacey Turner) heads to court. However, she never comes back, which sends Jean Slater (Gillian Wright) spiraling out of control. Sharon Watts (Letitia Dean) makes a remark about the Slaters’ cleaning. Suddenly, Jean hops into a delivery van and barrels wildly down the street until the vehicle crashes.

Eastenders spoilers reveal that Stacey was convinced that she was going to prison. When she went to court, she promised Jean that she would let her know what happened. Jean doesn’t hear from Stacey, which only makes her think the worst has happened. She’s also upset that every single time she reconnects with her daughter, someone or something rips them apart. This would be the second time that someone on the square separated Jean and Stacey.

Eastenders spoilers reveal that Sharon is getting ready to open up her new gym. There is a van delivering items to her. She makes a comment about the Slaters’ poor cleaning, which sends Jean reeling. It is what causes an already unstable woman to completely snap!

In the new issue of Inside Soap magazine, Jean hops into the delivery van. The driver and Sharon both yell at her to get out or they’ll call the police. This only seems to egg her on, though. She puts the van into gear and floors the pedal, which quickly causes her to crash. An insider told the publication that Maureen “Big Mo” Harris (Laila Morse) watches the entire scene unfold and is in complete disbelief.

“Mo can’t believe her eyes as she witnesses what can only be described as totally outrageous behavior from Jean. Has Jean simply gone off the rails as a result of her anguish over Stacey? Or is there a method to her madness, perhaps?

The police end up arriving and immediately go into action. However, Sharon asks them to back away for just a few minutes. Sharon tries talking to Jean woman-to-woman, as one mother to another. That is when Jean opens up about Stacey’s disappearance and how afraid she is for her family. Sharon understands and shares something she just learned about her own family.

At this moment, a situation that could have spiraled even further out of control was instantly diffused. Sharon even gives Jean an idea on what to do next. However, will this idea actually help her cope with Stacey’s absence or make things even worse? Jean feels that she really doesn’t have anything more to lose. Remember, Jean’s cancer is back and this time it’s terminal. So, there’s no guarantee that Jean will even still be alive if and when Stacey returns.