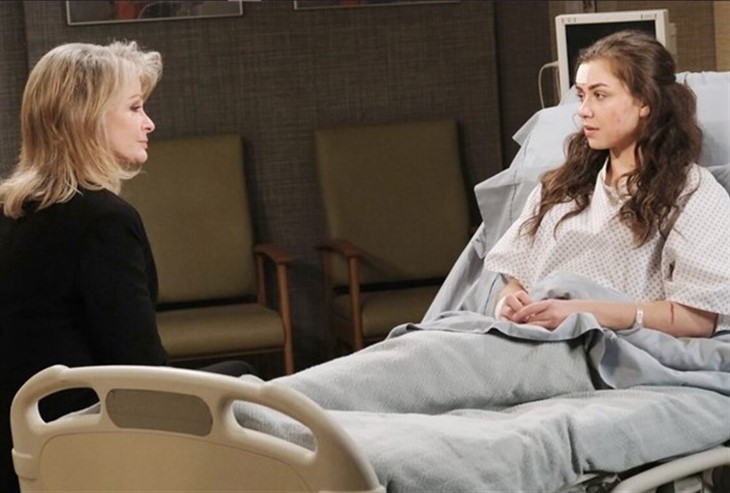 Days of Our Lives spoilers reveal that Ciara Brady (Victoria Konefal) has no memory of Ben Weston (Robert Scott Wilson). There are other missing “files” from the past three years. Since then, she has matured, learned life lessons, and healed from trauma. Before her transformation, she felt broken and had unpredictable explosions. Will she regress back to Ciara’s rage days?

DOOL spoilers reveal that Ciara was found, but lost all over again. At least, that is what it feels like to Ben. Ciara has been diagnosed with amnesia and doesn’t remember her motorcycle crash, which led to Ben tending to her injured leg in an old cabin. During that time, the two bonded. Ciara’s accident is what triggered the “Cin” era. If she had never taken Bo Brady’s (formerly Peter Reckell) bike out that night, both Ben and Ciara’s lives would be totally different today.

Ben and Ciara have been together since 2018, which means three years of memories are gone. That’s a lot of data to be wiped from the mind. One detail that has never been mentioned is if Ciara’s amnesia is limited to her memories and experiences with Ben, or if all memories from the past three years are gone. In Ciara’s case, it’s a physical trauma that triggered the amnesia, not a psychological one. So, that indicates that she should have Ben-less memories that have disappeared.

Days of Our Lives spoilers reveal that Ciara has been through a ton of trauma since her teen years. One event that really changed her was being raped by her stepbrother, Chase Jennings (Jonathan McClendon). He pretty much got away with it because his lawyer father, Aiden Jennings (Daniel Cosgrove) sent Chase to a cushy mental hospital instead of prison.

Add all of this to losing her father not once, but twice, as well as everything else that Ciara went through. She definitely was a teenage girl with a huge chip on her shoulder. She was angry, felt broken, had depression along with fits of rage. She was also unpredictable and when her emotions took over, she would take unnecessary risks. Those were Ciara’s rage days and she did heal from her issues.

However, that was a process that took a few years. It wasn’t instant, so we have to wonder if her old issues will resurface. Granted, healing and transformation isn’t really a single memory, it’s more like “rewiring” the brain. However, amnesia and personality changes seem to be linked to a large percentage of patients. The person Ciara was right before meeting Ben was completely different than the woman we see today. Honestly, they are like two completely different people. So, while she did get rape trauma counseling before meeting Ben (the assault happened in 2016), that was an ongoing healing process. Plus, Ciara had other issues unrelated to the sexual assault.

Days of our Lives (DOOL) Spoilers: A Jake and Gabi Hookup Leads to a Bun in the Oven? #DOOL #DaysOfOurLives #Days

There was also her age to consider. 3 years of missing memories to a middle-aged person might not have a big effect on their personality. However, 3 years deleted from the mind of someone in their teens or early 20s will be obvious and profound. This is because at that age, their brains are still developing and maturing. How an 18-year-old reacts to rejection will look very different than how the typical 21-year-old deals with it. Will we see the “old Ciara”, especially when she is released from the hospital? Or is this storyline only going to be focused on forgetting Ben ever existed?

Be sure to catch up on everything happening with DOOL right now. Come back often for Days of Our Live spoilers, news, and