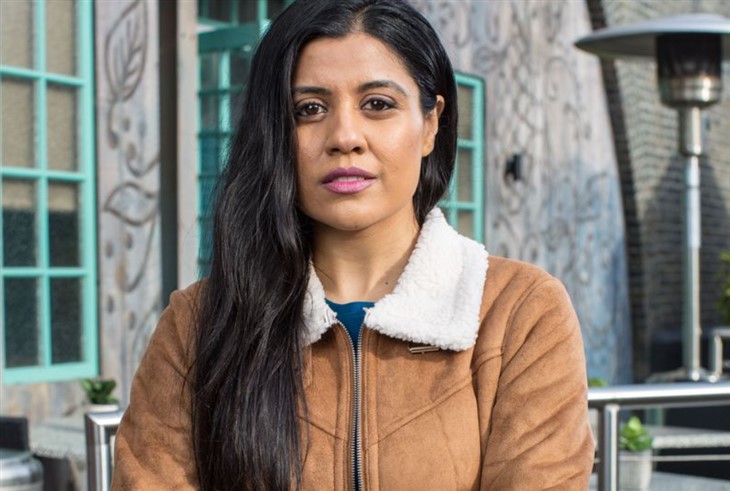 EastEnders star Priya Davdra opens up about her character’s (Iqra Ahmed) new romantic relationship with newcomer Mila Marwa (Ruhtxjiaïh Bèllènéa). Viewers may recall that Iqra recently split up with Ash Panesar (Gurlaine Kaur Garcha) after she found out that the latter knew Jags Panesar (Amar Aditia) is in prison for a crime he didn’t commit. Although it’s still early to say, Davdra is hopeful about her character’s new love interest.

The actress said that her character is both “excited and nervous” given that Mila is the first person she considered dating after her recent fall out with Ash. Iqra hopes that this time around, she’ll get to build a strong relationship without any secrets, not like the one she previously had.

“She wants to take that leap and wants to be confident and in her decision… [Irqa] is living on The Square on her own and has realised that she deserves some happiness,” she said.

“I think she wants to do something for herself, because in the past it was always for Ash or her sister or her grandparents,” Davdra added.

EastEnders Spoilers – Will Iqra Ahmed And Mila Marwa Click Together?

Davdra has high hopes for Iqra and Mila. She believes that Mila is a good match for her character. “Iqra is more sensible and level-headed and Mila is a form of excitement that has come into her life. They share a similar experience of coming out and their cultural backgrounds,” she explained.

They may be different in certain areas but they also share a lot of similarities. Plus, “opposites attract” and Mila has a way of bringing out “Iqra out of her shell.”

Spoilers for next week’s episode reveal that Iqra and Mila’s relationship will be off to a rocky start. It all starts when they both participate in Kim Fox’s (Tameka Empson) dating experiment. Things were going well until a photographer took a photo of Iqra and Mila together, which sends the latter into a meltdown.

Davdra admitted that her character “doesn’t know what’s going on with Mila” and is wondering if her reaction “has anything to do with her, and blames herself due to her past relationship.”

Mila’s behavior forces Iqra to leave but later on, Kim manages to convince her to hear Mila out. That’s when Iqra finds out about Mila’s troubling past. She reveals that her family’s religious beliefs and homophobia drove her to ran away from home. She doesn’t want to be found and fears that being photographed will lead her family to her.

The actress said that “Iqra has been through a similar thing,” and “She came out only recently to her family so she definitely understands what Mila is going through and can advise her based on her experience.”