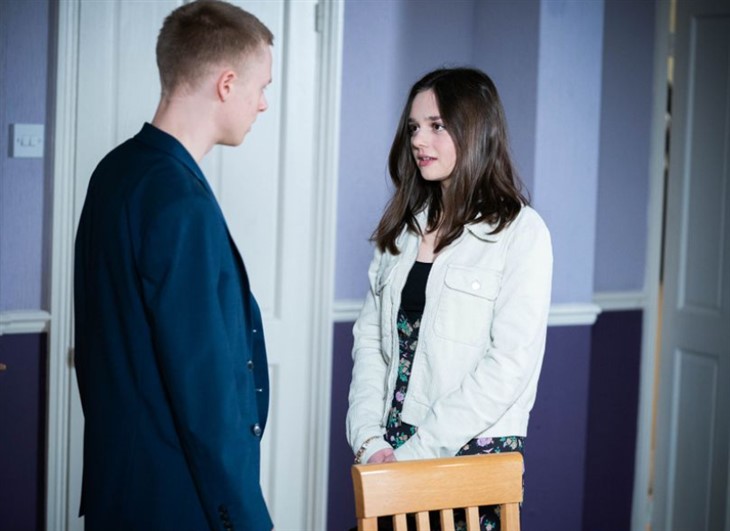 EastEnders spoilers hint that Bobby Beale (Clay Milner Russell) will come clean about his past to Dana Monroe (Barbara Smith). The pair have gotten closer together and in upcoming scenes, the two will spend the night together, which prompts Bobby to tell Dana about his killer secret.

Bobby met Dana through online dating and they’ve been getting closer ever since. However, Bobby has been lying to her about his identity. He comes by the name Robert Hills so he can hide his dark secret.

Fans will see the pair head to Kathy Beale’s (Gillian Taylforth) empty house. They will spend the night together and Dana will wake up at Bobby’s house the following morning. Their day starts with an awkward encounter as Peter Beale, Bobby’s brother, comes home. Things go from bad to worse later on when Bobby and Dana come across Kim Fox (Tameka Empson) who says she screened Bobby from her dating service. Will Kim’s remarks set off warning bells for Dana?

Bobby eventually decides to tell Dana the truth about his past and how he played a part in the death of his sister Lucy. Later on, Peter comforts and encourages his brother to fight for his love. After his serious talk with Peter, Bobby decides to meet up with Dana so he could explain himself.

Bobby will also turn to Iqra Ahmed (Priya Davdra) for some advice about his relationship problems. She’ll tell him that he doesn’t need to pretend. Will it be the end for Dana and Bobby? Or will she accept and love him despite his past?

It seems like the soap may still explore the pair’s budding love story. Spoilers tease that Bobby will be introduced to Dana’s dad Harvey Monroe (Ross Boatman), who is described as a “traditional and a real family man.”

At first, he’ll be delighted to know that his daughter has found a match in Bobby. But will he think the same once he finds out the truth about Bobby?

In an interview with the media, Boatman expressed how happy and blessed he is to be part of the soap. The actor loves EastEnders and he’s excited to get started.

“Some actors long for all the glamour of the Hollywood Hills. Others dream about the bright lights of London’s West End,” he said.

“All I ever wanted was jellied eels, Albert Square, and a cheeky pint at Queen Vic,” he added.

Days Of Our Lives (DOOL) Spoilers: Ben Takes A Step Towards Ciara – Belle and Shawn Shocked