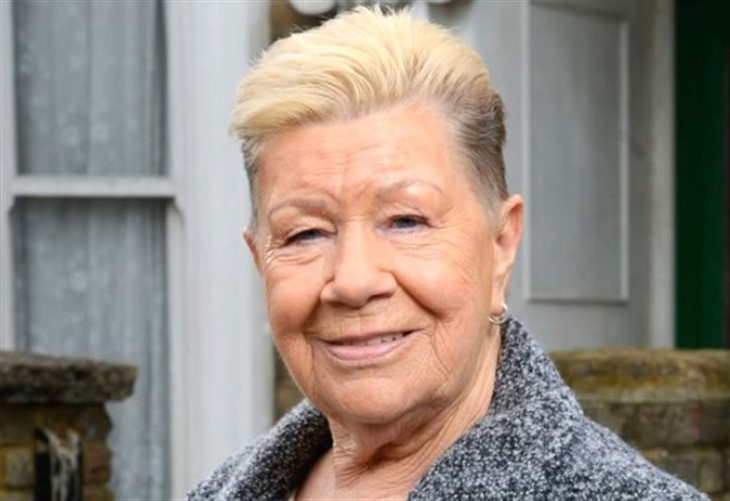 EastEnders spoilers reveal that after an incredible 20 year run, Laila Morse is set to leave — but not for long. The actress has played market dealer Big Mo since 2000.

The Daily Star claims the actress will leave in spring with writers hard at work to develop a suitable storyline exit.

But don’t expect this exit to be permanent!

An EastEnders spokeswoman said, “Just like many occasions before, Big Mo will be departing Walford but as always she’ll no doubt be back in the not too distant future.”

EastEnders Spoilers – Will Big Mo Be Gone By Spring?

Yet The Star claimed the exit would be final with a source telling the publication, “Laila is leaving the show. Her current contract is coming to an end and execs agreed this was a good time to write her out. It also claims that bosses had ruled out killing off the matriarch of the Slater family.”

Nonetheless it appears that the legendary actress is only taking a break from Walford.

According to the source, “It hasn’t been decided how Big Mo will leave. But it is unlikely to be too explosive and she definitely won’t die.”

Fans are aware that Laila has taken several breaks over the years so another one should not cause alarm. She came back in March 2018 following years of sporadic appearances. At that time Mo’s granddaughter Kat also came back.

It has become custom to just expect that Laila will come and go from the soap.

“Just like many occasions before, Big Mo will be departing Walford but as always she’ll no doubt be back in the not too distant future,” a BBC spokesperson told Digital Spy.

EastEnders Spoilers – Big Mo Is Not The Only Departure

On the subject of exits, star Jake Wood who plays Max Branning recently talked about his momentous decision to leave the soap.

“I’ve slept with 15 women in 15 years,” he said. “I’ve had four marriages, ten affairs, shared a hot tub with Ian Beale, gone to prison, been throttled by my brother and been buried alive. It’s time for Max to go.”

“It’s been great spending more time with the kids, doing some home-schooling, and I’m looking forward to having a better work-life balance.”

“I am happy with the decision. I think it was the right one, but I am really pleased they’re keeping the door open for me to return. Never say never, you never know.”

Days Of Our Lives (DOOL) Spoilers: Lani And Eli Finally Get Their Twins Back Safe And Sound