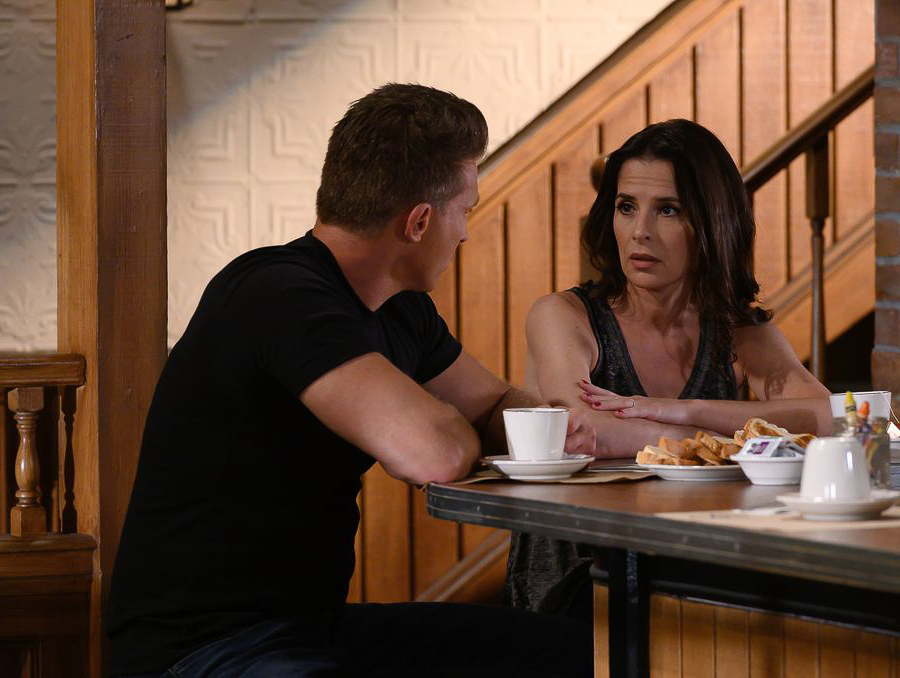 General Hospital (GH) spoilers tease that in Port Charles, NY Sam McCall (Kelly Monaco) and Jason Morgan (Steve Burton) will have a bittersweet conversation as he asks her if she’s moving on with Dante Falconeri (Dominic Zamprogna) in an upcoming episode of General Hospital!

General Hospital viewers know that Sam and Dante have bonded as friends, but Jason doesn’t know that. He has seen Sam with Dante a couple of times now, once checking on him in his hospital room after Alexis Davis (Nancy Lee Grahn) charged forward with a lidocaine loaded syringe and Dante was in her way! Dante’s life has in many ways been just as dangerous at times as Jason’s, albeit on the other side of law and order for the most part. Sam broke up with Jason because of his dangerous lifestyle, and to protect herself and her children. Given that, Jason really doesn’t understand why Sam is hanging out with Dante so much!

In reality, they are not “hanging out” they are just more friendly with each other than they had been. Dante and Sam have known each other for years – he’s Sonny Corinthos’ (Maurice Benard) oldest son, so they have been in each other’s orbit. They just have never really taken time to know each other very well until recently. Part of that was Sam’s feeling she owed Dante because of her mother Alexis nearly killing him. Jason knows that mentally but in his heart he cannot help but wonder if Sam and Dante are moving on with each other. Lulu Spencer (Emme Rylan) is in an indefinite coma, and Sam and Jason never remarried. Seeing them together more and more often is bugging Jason, and he feels Sam owes him the truth, if that is what is going on!

General Hospital (GH) Spoilers: Sneaky Finn Gets DNA – Determined To Find Out If He Is Chase’s Father

In Sam’s mind, Jason really has no reason to want to know what is going on in her personal life, other than things related to the children. It hurt her terribly to break off with him, but it really got to her the night the Floating Rib exploded and she thought he and Danny Morgan (Porter Fasullo) both had been killed. Jason hadn’t even called her to say they were okay, although she found out later there had been extenuating circumstances – his phone had run down! Jason should know she didn’t leave him for someone else, and she didn’t stop loving him. But she did have a good point that “the business” and usually concerns regarding Carly Corinthos (Laura Wright) always seemed to be first – even after Sonny disappeared and now is presumed dead!

In a way, Sam can understand that Carly needs emotional support for Jason, and he’s really not doing anything more than what Sam herself is doing for Dante. But Jason comes to the point where he is so bugged when he sees Sam and Dante together often, he finally confronts her about it. Sam, to be honest is a little bit offended because of the jealous way that Jason is coming across! She pointedly tells him that she and he are not together, and it’s really none of his business whether she is seeing someone, or not seeing someone, although she doesn’t clarify anything. Jason is left not sure how to take what Sam told him, although as he turns to leave, she does tell him if she and Dante were more than friends, because of the children, he’d be the first to know!

The Young And The Restless (Y&R) Spoilers: Amanda Is Devon’s Future – Cheating With Elena A Mistake