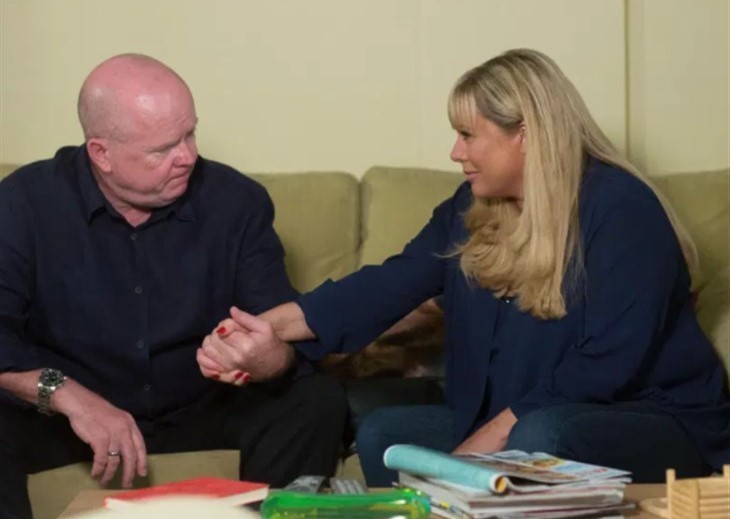 Eastenders spoilers reveal that in Walford Phil Mitchell (Steve McFadden) and Sharon Beale (Letitia Dean) will share a tender, touching moment. On the one-year anniversary of Denny Rickman’s (Bleu Landau) death, Sharon will be thinking about her oldest son. Phili comes to pay his respects and the two remember how much joy Denny brought to their lives.

Eastenders spoilers reveal that one year ago, Sharon was pregnant with her youngest, Albie Watts. Phil was chasing Keanu Taylor (Danny Walters) after finding out the hit didn’t happen the way it was ordered. When Keanu, Phil, and others suddenly jumped on the boat during the intense pursuit, there was damage to the watercraft. The boat’s lower deck started to flood with water. Ian locked Denny in one of the lower rooms, then he dropped the key.

Before Denny drowned, he left his mother a voicemail saying that Ian locked him in and he couldn’t escape. Months later, Sharon would find that voicemail and plot to avenge Denny’s death.

Eastenders spoilers reveal that Sharon schemed with Phil to get the pills that would poison Ian. As he began deteriorating, everyone would mention his failing health. Sharon would just say that all he needed was some rest. One day, Max Branning (Jake Wood) overheard Sharon on the phone. Instead of keeping appointments to have Ian go through tests, she kept delaying them. Jake was able to connect the dots and warned Ian that his wife was killing him. He was in denial the first few conversations, but then Ian had to face facts. In fact, Jake and Ian went to a doctor together to get tested to see what Sharon was putting in his body.

She tried to kill him one night, but she just broke his spirit instead. He disappeared and now Sharon has to deal with the drama from Max, Kathy Beale (Gillian Taylforth), and Ian’s other love ones. They don’t know that Ian was directly responsible for Denny’s death, but perhaps they should.

In the new issue of Inside Soap magazine, it is confirmed that Phil will come to pay his respects on the one-year anniversary of Denny’s death. Sharon is sitting on a bench and the two talk about their lives with the boy. Even though Phil wasn’t Denny’s biological father, he loved him like he were his own.

It is teased that Phil and Sharon’s peaceful moment is shattered when Linda Carter’s (Kellie Bright) name is mentioned. It causes Phil to explode and he suddenly runs off to deal with Linda. As for Sharon’s living arrangement at The Vic, that won’t last much longer. Kathy is going to have delivery men move all of her stuff out of the pub. If Sharon won’t tell her where Ian is or what really happened to him, then she doesn’t want her there. However, considering that it’s the same week as Denny’s death, could Sharon last out and tell everyone that he murdered her teenage son?