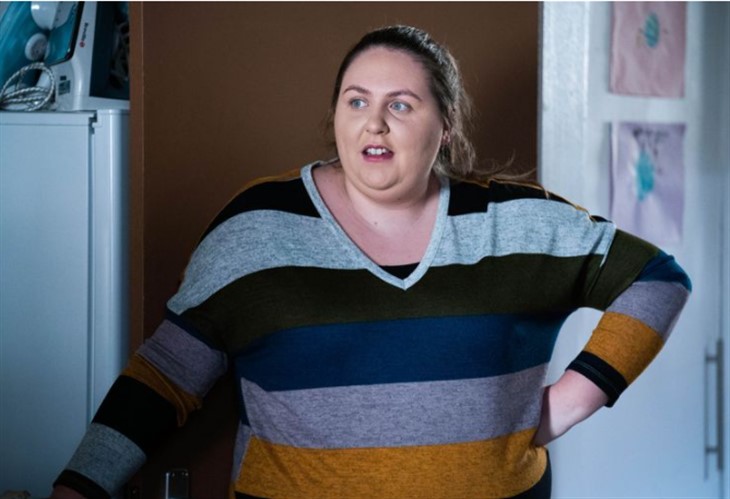 Eastenders spoilers and updates reveal episodes next week will show Bernadette Taylor to make a promise to the couple Rainie (Tanya Franks) and Stuart Highway (Ricky Champ) for surrogacy plans.

Before Bernie and Karen (Lorraine Stanley) came home to find their living room overturned by the loan sharks, they overheard the couple Rainie and Stuart considering finding a new surrogate. With her family struggling against financial woes, Karen decided to be the surrogate, but Bernie shut her mother’s idea down.

Bernie secretly meets up with the couple, determined to go with the deal that it’s her choice and she’s free to do what she wants with her body. A scene shows Bernie being emotional as she assures the couple she won’t break Rainie’s heart and her promise to them.

With her family’s increasing debt, Karen has to cut expenses by skipping her meals. The family’s alarming situation will be an eye-opener for Bernie, which will lead her to promise such a life-changing decision to the surrogate parents.

As a mother, Karen wants to keep her children away from the struggles. But now that Mich is jobless and her family is scraping by, Bernie as the older sister “is definitely feeling the stress more than ever.”

The portrayer of Bernie actress Clair Norris recently has commented on the big storyline for her character. The actress told Digital Spy: “The Taylors are well known for not being fortunate with money – sharing food, getting coupons and vouchers together to get through the day, and missing out on meals. I think Bernie really notices it more because she is getting older now and has to be more responsible, whereas when she was younger she was blindsided and told not to worry. Now that is reflected onto Bailey,” Clair explained.

The upcoming episodes will show Bernie’s concerns for half-sister Bailey, who is still very young to deal with financial issues. The actress reflected on what her younger character has experienced growing up by choosing the cheaper options for the things she wants because her family just can’t afford much. She’s determined to protect her as possible as she can because “she doesn’t want Bailey to feel how she felt when she was growing up.”

EastEnders – Make Promises You Can Keep

If ever the family proceeds with Bernie’s deal, it won’t be her first time getting pregnant. The character has been through much as a teenager when she got pregnant and later suffered a miscarriage due to stress in a Great Gas Explosion at the Square in 2017. With Bernie’s tragic history with pregnancy, fans are set to find out how is the character going to cope with carrying a baby that’s not hers.

The Bold And The Beautiful (B&B) Comings And Goings: A Bombshell Departure!