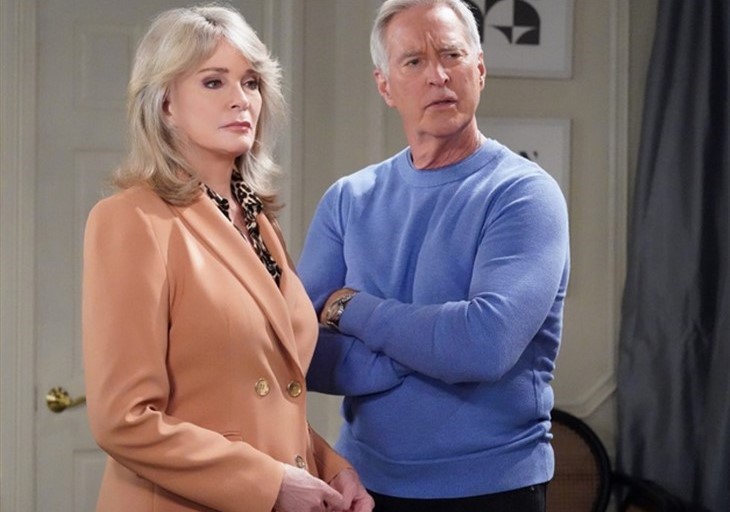 Days of Our Lives spoilers reveal that the winter promo indicates that John Black (Drake Hogestyn) asks God how to save Marlena Evans (Deidre Hall). John gets an answer right away and sees a vision of how to defeat the devil. However, it won’t be easy and it could be directly connected to Eric Brady (Greg Vaughan) returning as a priest.

Days Of Our Lives Spoilers – Begging God For Help

DOOL spoilers reveal that the winter promo shows John sitting in the living room of the penthouse. John has out the items from his memento box from his days as a priest. The items in it haven’t been used since John tried to save Marlena from the devil 27 years ago. Fans recall that John opened it up in front of Marlena when they were discussing Johnny DiMera’s (Carson Boatman) movie.

Once John gets free from the DiMera crypt, a lot of other events happen that expose “MarDevil.” Doug Williams (Bill Hayes) getting out of Bayview is one of those events, as well as a mystery hiker, who is probably Gabriel the Archangel in human form. The mystery hiker will issue a warning to Ben Weston (Robert Scott Wilson) and Ciara Brady Weston (Victoria Konefal).

Back to John, he is seen in the winter promo begging God for help as he goes through the religious mementos.

John gets an answer right away as God gives him a vision. John sees himself with a Bible and crucifix. Marlena is in the bedroom and it appears that John is getting ready to perform an exorcism. However, John isn’t a priest anymore and he might doubt his ability to cast the devil out of Marlena.

Days of Our Lives spoilers reveal that Eric Brady (Greg Vaughan) returns just in time to help save Marlena. Eric is back to being a priest and is ready to battle the demonic force. Even though Eric might be part of what saves Marlena, he will need to join forces with John in order to win the war.

Days of Our Lives Spoilers – Love And Faith Defeat Devil?

During the first possession storyline, John performed the exorcism, but he wasn’t winning. It wasn’t until John used his deep love for Marlena and begged God to “let it be him.”

John knew that Marlena wasn’t strong enough. John was willing to sacrifice himself – body and soul – to save Marlena. That was the power of his love. So, it is teased that love alone won’t save Marlena, but neither will faith. But together, love and faith just might be enough to send the devil straight back to hell.