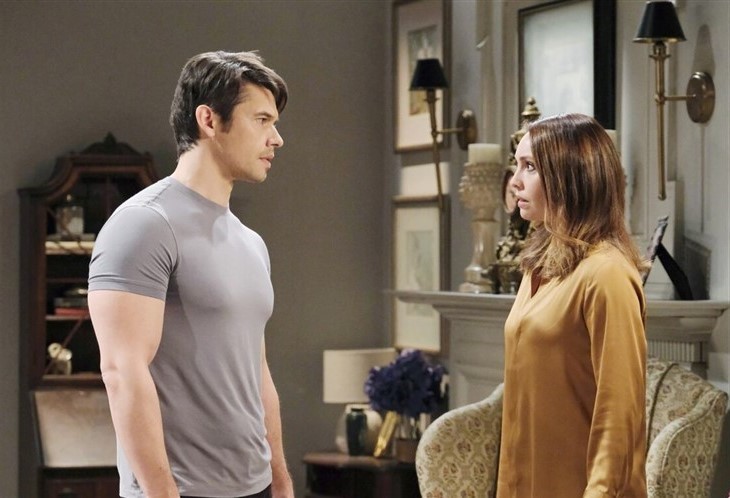 Days of Our Lives (DOOL) spoilers tease that Gwen Rizczeck (Emily O’Brien) didn’t plan on falling in love with Xander Cook (Paul Tefler). But as Xander helped her cover up the fact that Abigail DiMera (Marci Miller) didn’t cause Gwen’s miscarriage, the two found themselves in love. But the return of Kristen DiMera (Stacey Haiduk) brings news that could end their new romance before it could even properly being.

Days Of Our Lives Spoilers- The Truth About Dr. Sarah Horton Hasn’t Been Revealed!

Kristen demanded that Gwen help bust her out of prison. Gwen barely even knows who Kristen is, so she basically laughed in Kristen’s face. That is, until Kristen informed Gwen that if she wants to stay with Xander, then Gwen had better do exactly what Kristen says because Kristen could blow up Gwen and Xander’s romance. Xander believes that Dr. Sarah Horton (Linsey Godfrey) dumped Xander on their wedding days to return to her ex Rex Brady (Kyle Lowder). But that isn’t what really happened.

Kristen had been posing as Susan Banks (also Stacey Haiduk) while the real Susan was in jail, pretending to be Kristen. Sarah discovered Kristen the night before the wedding and threatened to tell everyone that Kristen was free. Kristen wasn’t ready to return to prison so she drugged Sarah and shipped her off to a tropical paradise prison. Meanwhile, Kristen used a mask to make her look like Sarah and made love to Rex. She also arranged for Xander to catch her and Rex making love. The fake Sarah told Xander that she was leaving town with Rex. And then she dumped Rex, who left town all alone.

Days Of Our Lives Spoilers – Xander Cook Will Want Dr. Sarah Horton Back.

Kristen told Gwen to break her out of prison or she would tell Xander exactly where to find Sarah. Regardless of what Gwen does, the truth won’t stay hidden long. Once Xander finds out that Sarah didn’t dump him and is a prisoner on a deserted island somewhere, he will likely drop everything, including Gwen to rescue Sarah and bring her home.

Will Gwen help Kristen? When will Xander realize the truth about Sarah? Will Xander bring Sarah back home where she belongs? Anything can happen in Salem so stay tuned to Days of Our Lives airing weekdays on NBC. And don’t forget to check back right here regularly for all your Days of Our Lives news, information and spoilers!