Who Is Gwen On Days Of Our Lives? 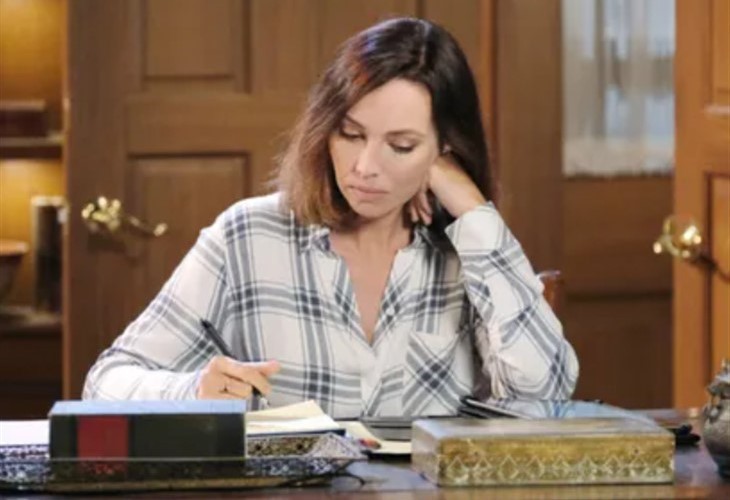 Days of Our Lives added a few new characters to the soap in the past few years. In June 2020, viewers met Gwen Rizczech (Emily O’Brien). The master manipulator turned out to be connected to a core family in Salem. With the NBC soap gaining a lot of new fans, some might be asking who is Gwen on Days of Our Lives? Keep reading because we have the answer to that question.

On June 5, 2020, Gwen was introduced as Claire Brady’s (played by Olivia Rose Keegan at the time) friend at Bayview. Claire was released early from the psychiatric hospital and went back to Salem. Soon after, Gwen showed up at John Black (Drake Hogestyn) and Marlena Evans’ (Deidre Hall) door. Gwen would turn out to be the ex-girlfriend of Jake DiMera (Brandon Barash).

Eventually, fans learned more about the history of Gwen on DOOL. Gwen was the daughter of Jack Deveraux (Matthew Ashford) and the stepsister of Abigail DiMera (Marci Miller). Gwen was convinced that Jack knew about her and chose Abigail over her. So, the storyline of Gwen targeting Abigail to punish her began. Over time, Gwen realized the truth – that Jack never knew that she existed. Unfortunately, Abigail’s life was already in tatters because of Gwen’s revenge.

Not only did Gwen sleep and get pregnant by Abigail’s husband, Chad DiMera (Billy Flynn), but Laura Horton (Jaime Lyn Bauer) died after a confrontation

Laura Horton (Jaime Lyn Bauer) died after a confrontation with Gwen. Although Gwen didn’t kill Abigail’s grandmother, not everyone in Salem is convinced it was an accident. Gwen also slept with Abigail’s husband, Chad DiMera (Billy Flynn), which led to a pregnancy and miscarriage.

Most fans view the character as a villain. There seems to be a shift with Gwen on Days of Our Lives as she does have remorse for the things she’s done. However, she also suffers from low self-esteem and abandonment issues. Despite her best efforts to be good, trouble follows Gwen everywhere she goes.

The only thing that seems to be helping Gwen turn her life around right now is finding love. Unfortunately, it looks like Gwen could revert back to her old ways when she fears losing Xander Cook (Paul Telfer). The soap is famous for redeeming even the most hated characters. So, we expect one day Gwen will be redeemed as well. Perhaps she will even earn the forgiveness of Abigail and Jack. It’s just a matter of when and how.

What do you think of the character of Gwen on Days of Our Lives?