Days Of Our Lives (DOOL) Spoilers: Sarah Horton Returns – Will Kristen Use Her To Make A Deal? 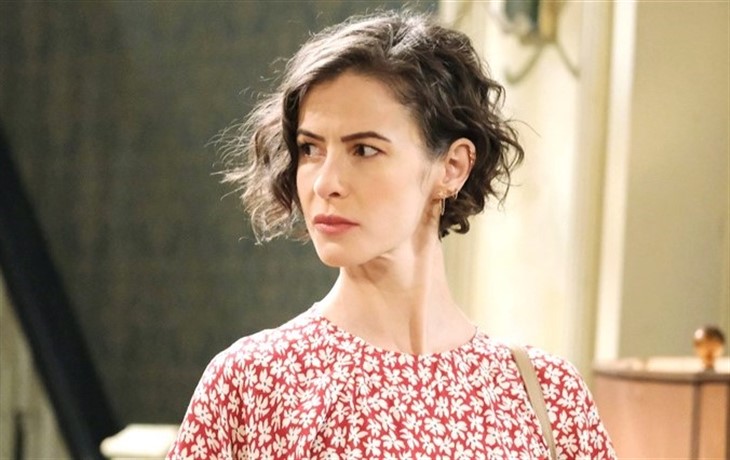 Days of Our Lives (DOOL) spoilers suggest that Sarah Horton (Lindsay Godfrey) may soon return to Salem. Will Kristen Dimera (Stacy Haiduk) use her as a bargaining chip after Sarah’s disappearance is discovered?

Days Of Our Lives Spoilers – Rex Brady Is Returning To Salem

Days of Our Lives Xander Kiriakis (Paul Telfer) believes that Sarah left town with Rex Brady (Kyle Lowder). However, when Rex shows up in Salem without Sarah, everyone is bound to have questions. Xander has told everyone who would listen that Sarah ran off with Rex so everyone in Salem knows what Xander believes happened. Of course, Rex’s return without Sarah is going to make everyone question what happened to Sarah. Will Xander accuse Rex of doing something to Sarah? Will this prompt Xander and Rex to work together to find Sarah? Will Xander figure out that Kristen is behind Sarah’s disappearance? Could someone come upon the Sarah mask after it comes to light that Sarah is missing?

Days of Our Lives Kristen not only escaped prison, but she has also kidnapped several people. Kristen kidnapped Sarah and banished her to a deserted island. Unfortunately, Sarah is still missing and Kristen is still a fugitive. Brady Black (Eric Martsolf) has broken off his relationship with Kristen and doesn’t want their daughter around her either. Kristen has lost everything that she was trying to hold onto because of her paranoia. Kristen did not trust Brady’s love for her and lost everything as a result. Kristen is also facing more prison time as well due to the kidnappings. Will Kristen give up Sarah’s location in a plea deal?

Days Of Our Lives Spoilers – Kristen Dimera Always Has A Plan

Days of Our Lives Kristen always has a backup plan after getting herself in trouble. Kristen went to prison for attempting to murder Victor Kiriakis (John Aniston). Kristen tricked Susan Banks (Stacy Haiduk) into trading her places so she could be near Brady. However, Kristen had to cover her tracks because her identity was discovered by Sarah. However, Kristen could use Sarah as a bargaining chip to get out of trouble again. Kristen is determined to get her life back and Sarah could be the way to do that. After all, Sarah is Maggie Kiriakis’ (Suzanne Rogers) daughter and Maggie has great influence over Brady.

Will Sarah be Kristen’s ticket to freedom? Will Sarah press charges if Kristen brings her back home? Has Kristen gone too far this time to make amends with anyone, especially Brady and the cops?

The Young And The Restless (Y&R) Spoilers: Phyllis Will Not Back Down – Rey Returns