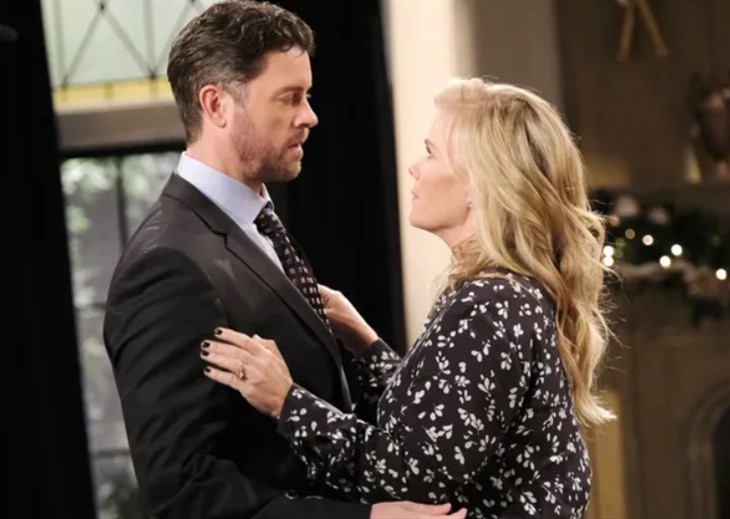 Days of Our Lives spoilers reveal that EJ DiMera (Dan Feurriegel) has a change of heart during the week of December 20. Just when Sami DiMera (Alison Sweeney) gives up hope, she could get her Christmas wish. Will EJ decide that he wants Sami back after all? What does this mean for Nicole Walker (Arianne Zucker) and Lucas Horton (Bryan Dattilo)?

DOOL spoilers reveal that Nicole questioned EJ about his feelings for Sami. Despite Nicole’s better judgment, she believed EJ when he claimed that his marriage was over. In Tuesday’s episode, Susan had a conversation with EJ about Sami. Even though Sami cheated on EJ with Lucas, Susan defended her daughter-in-law. Exasperated with EJ, Susan said for him to get his head together and stormed off.

Sami is furious that EJ slept with Nicole. However, she has every intention of forgiving him and just wants to be his wife again. EJ has already filed for divorce, which Nicole informed Sami of. It is teased that Sami will file her own papers and deliver them to EJ. However, Sami’s goal isn’t to sever ties with her husband. She wants to bring him back to her, so she pulls him into a passionate kiss while serving the divorce papers. Talk about mixed messages!

It is teased that EJ will have a change of heart during the week of December 20. This might not just be about Sami, though. EJ’s change of heart could be spurred by catching Nicole and Rafe Hernandez (Galen Gering) together.

Days of Our Lives spoilers reveal that Sami gets her Christmas wish. We know that Lucas is encouraged by Allie Horton (Lindsay Arnold) to go after Sami. However, it is also teased that Lucas makes a shocking discovery. The discovery could be that Philip Kiriakis (Jay Kenneth Johnson) is alive, or he could have his heart broken yet again by “Ejami.”

Whether Sami picks EJ or Lucas, what does that mean for actress Alison Sweeney? As far as we know, Sweeney only agreed to sign on for a special storyline that would last most of 2021. Well, the year is coming to an end and unless a new contract is signed, that means Sweeney will probably exit.

However, Lucas and EJ don’t seem to be going anywhere, so where does that leave Sami? Will she be written off by sending her back to Europe for some reason? Maybe it’s for her other child? Or will Sami simply be mentioned in the soap but rarely seen? We will have to keep watching the NBC soap to find out what happens next.