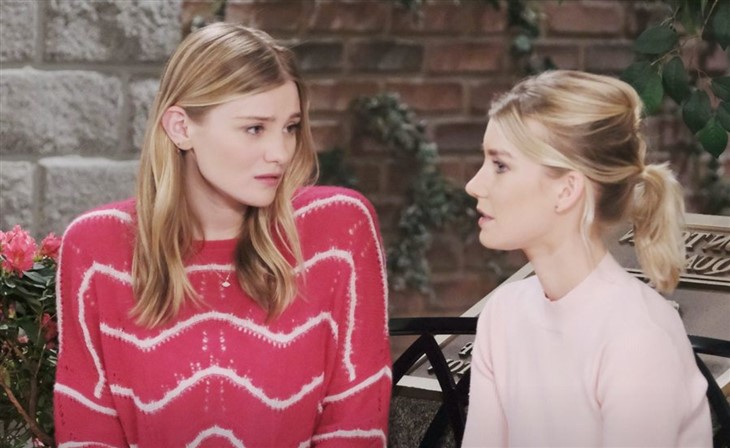 Days of Our Lives (DOOL) spoilers reveal that in Salem Claire Brady (Isabel Durant) and Allie Horton (Lindsay Arnold) can be scared into talking. He wants answers about Ben Weston (Robert Scott Wilson) and Ciara Brady (Victoria Konefal). When they refuse to cooperate, Eli puts them in a cell, positive that an overnight hold will scare them into talking.

DOOL spoilers reveal that when everyone sees Claire at the altar instead of Ciara, there are a lot of questions. Soon, Theo Carver (Cameron Johnson) realizes that the woman he was going to marry is gone. Of course, the only person who would have taken her is Ben. The police are called and an investigation begins.

Eli takes Allie and Claire down to the police station for questioning. However, he’s not getting any answers. He knows the tragic history of Ben and Ciara, but in his mind, nothing excuses committing a crime.

Claire’s mother is a lawyer, so she goes to the police station. However, she is not there to represent Claire or Allie. She is acting on Chad DiMera’s (Billy Flynn) behalf. When Chad finds out that Theo’s bride was kidnapped, he begs Belle for her help. She explains to Claire and Allie that all Eli wants is the truth but they refuse to cooperate. Soon, both Eli and Belle put pressure on the girls to start talking or they could face legal consequences.

Days of Our Lives spoilers reveal that Eli decides to use a scare tactic to get Ben’s helpers to stop protecting a kidnapper. Allie and Claire are thrown in the overnight holding cell. Eli thinks that maybe spending overnight in a jail cell will change their perspective on the situation. That might or might not work with Allie.

However, Claire is far too stubborn to fall for the tactic. When Claire feels what she is doing is right, then nothing can stop her. She’s not saying a word and doesn’t care if she is put in jail overnight, for a month or even a year.

Even though Ben has committed a crime and Ciara did not go willingly, there is hope for “CIN” fans. As Ben and Ciara sit in the old cabin eating Chinese food, there is a shift. It is confirmed that Ciara has a major breakthrough. Now, how will Ben avoid prison time?

A crime has to have a complainant or a victim. If Ciara claims that she went with Ben willingly, then there is no case. For that to happen, though, Ciara has to either remember or admit she loves Ben. Time is ticking as the police will figure out where they are soon. Will they emerge from this united as a couple or is this the end of “CIN?”