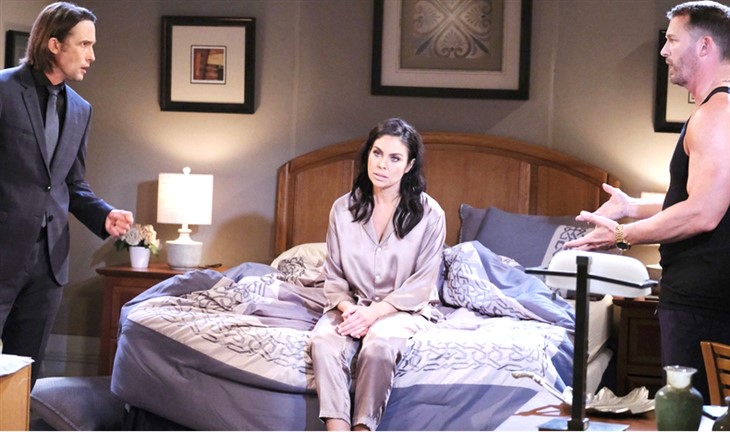 Days of Our Lives spoilers tease that a jealous Philip Kiriakis (Jay Kenneth Johnson) will send a threatening email to Brady Black (Eric Martsolf) over Chloe Lane (Nadia Bjorlin) in an upcoming episode of Days of Our Lives!

Days of Our Lives viewers will recall that Philip’s little surveillance trip to Pennsylvania did not end well – Brady and Chloe had to land there in a small town because of trouble with the plane. They overbooked the rooms and Brady and Chloe shared one, and shared the bed after Chloe didn’t want Brady sleeping in a chair because of his recent healed injuries.

Days of Our Lives spoilers show that little spy mission didn’t end well for Philip. All he did was ensure that Chloe knew that he didn’t trust her to be faithful to him! But that wasn’t enough for Philip – even after Chloe gave him a well-deserved dressing down! Philip will want to make sure that Brady stays away from Chloe, and he threatens him via an email!

Days Of Our Lives Spoilers – Insecure Much, Philip Kiriakis?

Longtime Days of Our Lives viewers will remember that Philip and Brady have been rivals over Chloe since high school. Yet, Philip had been the one who took “Ghoul Girl” to a school dance only because he was dared to and lost the bet! Even so, the ugly duckling turned into a gorgeous swan before everyone’s eyes, and the beautiful young Chloe became someone for the boys to fight over, and Brady and Philip’s rivalry began!

Brady won out when he and Chloe married – but then lost her over drinking and drug dependence. But they gave it another try and married again some years later, while Philip had gone in the army for a while after he dated Belle Black (Martha Madison) for a short time and came back and worked with his father for a while. But then Philip left again, and DOOL fans will recall when he came back this time, again he had gambled and messed up his life in other ways, in trouble with the mob over money he’d borrowed from a loan shark! But because of that years-old rivalry with Brady, he just cannot overcome his insecurity over Chloe!

Days of Our Lives spoilers indicate that Philip, in anger, already threatened to kill Brady if he messed with Chloe, but only verbally. Now he puts in in writing in a very threatening email, and that is probably the worst thing he can do! For one thing, not that Days of Our Lives spoilers tease anything about Brady being killed, but if he were to be, then Philip would be suspect number one!

As it is, Brady could easily press charges against Philip for communicating threats, and the charges would stick. Philip could claim someone else hacked into his email account and sent the offending post, but it would be very difficult to prove! For one thing, there is too much of a commonly known history of romantic rivalry between Philip and Brady! Plus, if Brady tells Chloe about the email and likely even lets her read it, that will be the end of Philip and Chloe, and she’ll certainly be driven back to Brady!

B&B Comings And Goings: Finn And Sheila Heat Up The Hospital, A Beautiful Model Returns