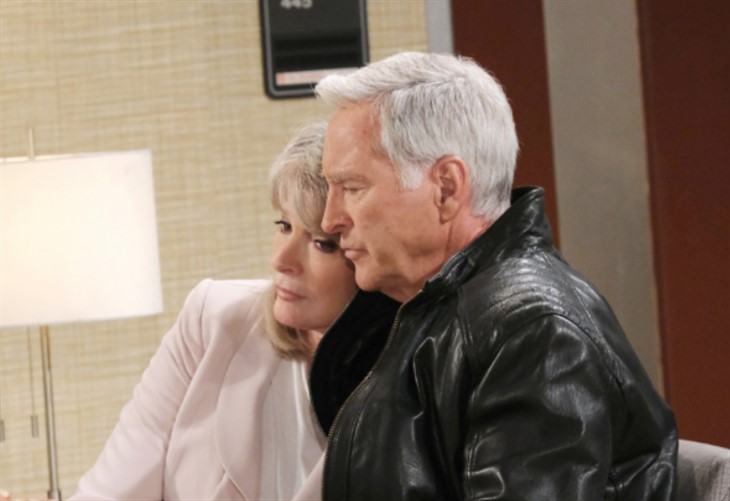 Days of Our Lives (DOOL) spoilers for Friday, October 15, 2021, reveal in Salem John Black practically losing his mind trying to figure out what could be wrong with Marlena.

Days Of Our Lives Spoilers – Doc Isn’t Quite Herself

Although Marlena (Deidre Hall) seems fine on the surface, John (Drake Hogestyn) knows the woman he has been in love with since the 1980s. She is acting off and although he has seen her act off like this before, it can’t be what it was then.

John knew that Johnny DiMera (Carson Boatman) making that movie about Marlena’s possession could open up all sorts of wounds from the past, but did it open up a portal for The Devil to take possession of Marlena again. When Marlena tells him about a bizarre dream she just had, John is more than alarmed. This all seems way too familiar but John isn’t quite ready to make his leap to Satan just yet. If Marlena morphs into a jaguar again, will John become a believer?

DOOL Spoilers – Rafe Hernandez And EJ DiMera Have It Out

It looks like Rafe Hernandez (Galen Gering) and EJ DiMera (Daniel Feuerriegel) are after the same woman again and this time, it’s not Sami Brady (Alison Sweeney). Instead, it’s her mortal enemy, Nicole Walker. We don’t think Samantha would be too happy about this, but she’s busy being held hostage and has no idea what’s going on in Salem.

Rafe has been interested in Nicole for ages but has had to hide his feelings while EJ is newly intrigued by the woman he was once married to. On Friday, the two men get into an argument over Nicole. Will Nicole like having this bevy of men? After all, she is still newly divorced, but it was her own affair with Xander Kiriakis (Paul Telfer) that helped end her marriage, so we know Nicole loves male attention.

Days Of Our Lives Spoilers – Philip Kiriakis Loses It

Philip’s (Jay Kenneth Johnson) jealous streak is becoming a real problem and Chloe Lane (Nadia Bjorlin) might not be able to take much more. He already caught her in the park with Brady Black (Eric Martsolf) and now he finds her with him again. It might all be a misunderstanding, but that still doesn’t mean Philip will be able to control his temper. Stay tuned to Days of Our Lives weekdays to see how these stories play out.

Brian Laundrie Featured On John Walsh Special: Where America’s Most Wanted Man Might Be