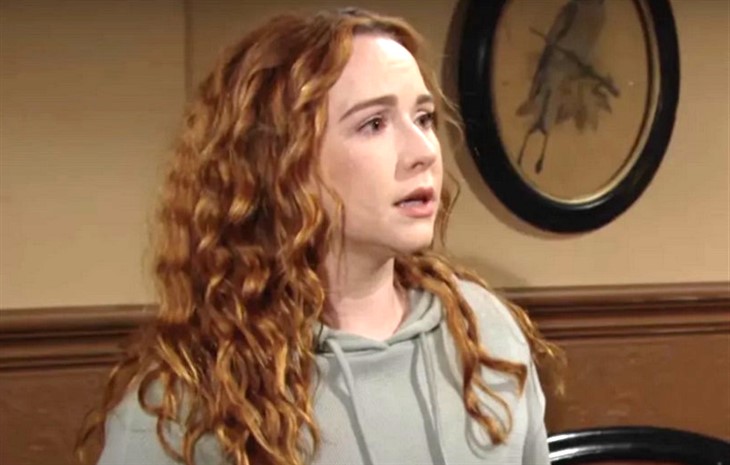 The Young and the Restless spoilers reveal Mariah in labor, but everyone is searching for her until she is found. But who will find her?

Stitch (Sean Carrigan) is still hanging around and somehow he comes up with a clue. After seeing a wrapper at the Chancellor mansion and learning it was from one of Mariah’s (Camryn Grimes) favorite protein bars, he notes that he saw someone leaving a convenience store with a large amount of those bars.

That’s when the gang brings in Kevin (Greg Rikaart), to get him to find missing footage in the store’s security cameras. Just when he thinks he has a break, Mariah is feeling contractions in her little wood-paneled room and is not sure if they are Braxton-Hicks or the real deal.

The idea of giving birth alone terrifies her so she uncovers that video camera she recently found and begs for help. Maybe her captor never planned on Mariah giving birth in there and she needs to let whoever it is know that she needs a doctor right away. Well, Stitch is a doctor, right? And he keeps turning up at the right place at the right time with all these sudden clues. And nobody finds this strange.

Y&R Spoilers – Abby Newman Has Her Own Plans

Meanwhile, Abby (Melissa Ordway) knows she has to take matters into her own hand, but this is never a good idea because Abby has a habit of screwing up when she does that. Kevin’s fancy footwork with the security cameras gives the gang the lead they need and Mariah is found in the nick of time. But with Abby going against the grain and devising her own plan, something is bound to go terribly wrong very, very soon.

And again, what about Stitch? Why is he there? Why does he care so much? He nearly got caught in a lie on Friday when Devon (Bryton James) pointed out that Nate (Sean Carrigan) is the new chief of surgery. Is he giving them all clues to throw them off the path or because he realizes keeping Mariah captive was not a good idea and now wants out? Because every clue the audience sees points to Stitch as the culprit here. Stay tuned to The Young and the Restless weekdays to see how this story plays out.