Days Of Our Lives Spoilers: Steve Plays Detective, Bonnie’s Past Key To A Free Future 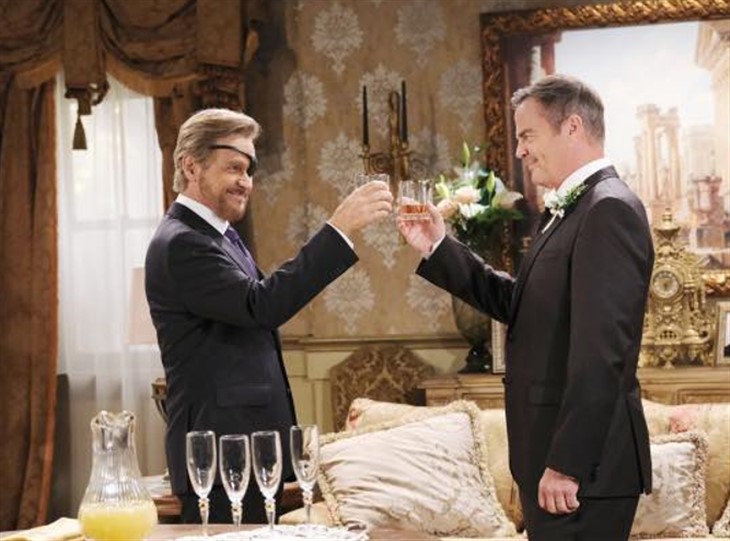 Days of Our Lives spoilers reveal that Steve “Patch” Johnson (Stephen Nichols) was the last to accept Bonnie Lockhart (Judi Evans). Now he’s the first to defend Bonnie as she faces theft and murder charges. Not only does he push Justin Kiriakis (Wally Kurth) to represent her, but Steve could help clear Bonnie’s name. However, finding the truth might mean digging into the past.

Days Of Our Lives Spoilers – Reasoning With Justin Kiriakis

DOOL spoilers reveal that Justin stops Rafe Hernandez’s (Galen Gering) interrogation. He has a change of heart after getting advice from Steve. He held onto his mistrust of Bonnie until Justin announced his engagement. Of course, by this time, Bonnie had proven that she was a different person. Steve’s instincts are pretty accurate, so when Justin is told to trust in Bonnie’s innocence, he listens.

Meanwhile, Rafe is interrogating Bonnie and informs her that there is new evidence in the murder case. It turns out that Calista had a letter that implicates Bonnie in the crime. The only thing she did wrong was giving into Calista’s blackmail instead of telling Justin the truth. The tricky part is going to be proving that Calista’s death was self-defense.

Days of Our Lives spoilers reveal that Justin will share with Steve the difficulty of Bonnie’s case. Since Steve is part owner of Black Patch, it only makes sense that he will probably investigate the case. After all, he is convinced that Bonnie is innocent.

There are some things about Calista that suggest there is something funny going on. The whole reason Calista was blackmailing her former sister-in-law was that she believed Bonnie killed her husband. If that was the case, then why wait so long to get vengeance? Was justice not important to Calista until she found out that Bonnie was marrying a wealthy man?

There is also the gun issue. Calista said that Bonnie used that gun to kill her former husband. She claimed that Bonnie’s fingerprints were all over it. If that was really that gun, it would be in police evidence. Even after years, it would still be in police custody, probably in a cold case file in a dimly lit and dusty basement. If the police never recovered the gun and Calista claims Bonnie’s fingerprints are all over it, then why not turn the gun into the police?

What if Bonnie’s husband faked his death? Perhaps the plan was to commit fraud with the Buddy Bucks, take the money and let Bonnie take the blame? It’s also possible that Calista might be the person who actually killed Bonnie’s husband. Money and jealousy are the top motives for murder and it might explain Calista’s letter.

It might not have been a letter written recently. It could have been Calista fabricating evidence to implicate Bonnie in her husband’s murder. So, why would Calista not give the letter to the police? One possibility is that the police already considered her to be the top suspect but cleared Bonnie. Another explanation is that the man’s death was ruled a suicide and not a homicide. If Steve can dig up the past, Bonnie’s future might be freedom instead of incarceration.