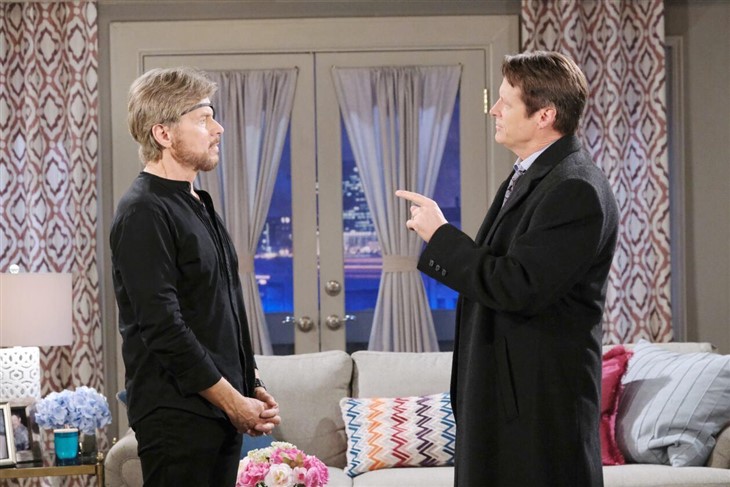 Days of Our Lives spoilers reveal that last month, Jack Deveraux (Matthew Ashford) asked Steve “Patch” Johnson (Stephen Nichols) for help. He wants to know what Gwen Rizczech (Emily O’Brien) is hiding. Next week, Steve will report his findings and it will blow up Jack’s world. Meanwhile, Gwen’s troubles multiply as she digs a deeper hole for herself.

DOOL spoilers reveal that Dr. Clay Snyder (Michael Lowry) blackmailed Gwen. She had to deliver drugs and in exchange, Dr. Snyder wouldn’t expose her miscarriage lie. Instead of just confessing the truth and accepting the consequences, Gwen did as Dr. Snyder instructed.

Then, Xander Cook (Paul Telfer) tried to help and as usual, that just made things so much worse. After Dr. Snyder’s heart attack, Gwen and Xander didn’t call 911. Instead, Xander dumped the body in the lake. The last time this storyline aired, Gwen was having to deal with a lot of questions from the police.

Jack is worried that Gwen is once again in trouble but isn’t coming to him for help. He believes that his daughter is lying about her connection to Dr. Snyder. He turned to Steve and Kayla Johnson (Mary Beth Evans) after overhearing them talk about Gwen. Steve agreed to do an investigation and that it would be off the books. That was one month ago and when the soap returns next week, we will finally get an update on this storyline.

Days of Our Lives spoilers reveal that during the week of August 9, Steve gives Jack bad news. This has to be concerning the investigation into Gwen and Dr. Snyder’s connection. The way that everything appears, Gwen and Dr. Snyder were partners in crime. Fans know that this isn’t exactly true and she was being blackmailed. However, Dr. Snyder was good about covering his blackmail.

With Gwen sneaking around and getting into arguments with Dr. Snyder, plus all the phone calls, Steve comes to one conclusion. He will inform Jack that Gwen is probably a drug dealer and must be involved in Dr. Snyder’s death.

When Jack gets the report from Steve, he will have some tough decisions to make. Does he confront Gwen about dealing drugs and her involvement with Dr. Snyder’s death? Does he just let the police do their job and stay out of it? Does he kick her out of the Horton house or pretend that everything is just fine?

It is likely that Jack will confront Gwen and demand answers. Meanwhile, she is already having to deal with Julie Williams (Susan Seaforth Hayes) telling everyone Gwen is a murderer. Then, there is the investigation into Dr. Snyder’s death. Right now, Eli Grant (Lamon Archey) is busy looking for Ben Weston (Robert Scott Wilson) and Ciara Brady (Victoria Konefal). However, when that storyline is over, Eli will be right back to interrogate Gwen and Xander.

It seems that Gwen’s troubles are going to continue multiplying. Even if she finally tells the whole truth, how can anyone believe her? We will have to keep watching the NBC soap to see how this story ends.

GH Spoilers: Austin Plans To Destroy The Quartermaine Family From The inside!