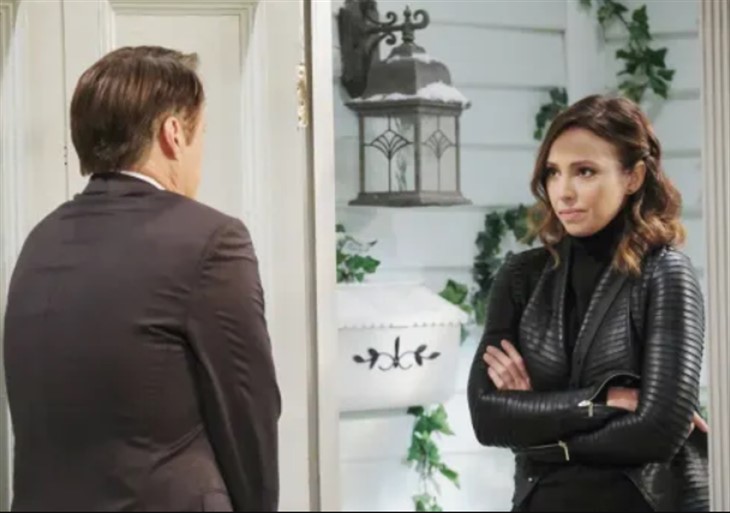 Days of Our Lives (DOOL) spoilers reveal that Jack Deveraux (Matthew Ashford) believed his daughter when Laura Horton (Jaime Lyn Bauer) died. However, Gwen Rizczech (Emily O’Brien) is now being questioned about another death in Salem. Even though she’s innocent of murder, Jack knows she’s lying about something. Could he mistakenly assume Gwen is a serial killer?

DOOL spoilers reveal that a lot of people were convinced Gwen killed Laura when the death was reported to the police. Some Salemites still think the manipulator is guilty even though she was cleared by Rafe Hernandez (Galen Gering). The only person who has believed Gwen’s side of the story is her father, Jack.

Dr. Clay Snyder (Michael Lowry) blackmailed Gwen and ordered her to deliver packages of stolen prescription medication. Tripp Johnson (Lucas Adams) noticed the pill counts were off, which he reported to his stepmother and the hospital’s chief of staff, Dr. Kayla Johnson (Mary Beth Evans).

When Xander Cook (Paul Telfer) threatened Dr. Snyder at the hospital, he ended up coming to the house. He was not intimidated by Xander and was threatening Gwen. So, Xander made his point a bit clearer by holding a sharp letter opener to his neck. He didn’t do anything to the doctor but he died moments after being released. It is assumed that Dr. Snyder had a heart attack. Xander ended up dumping the body in a lake, which has since been found. Eli Grant (Lamon Archey) is now repeatedly questioning Gwen about the murder.

In addition to all of this, Jack overheard Kayla talking to Steve “Patch” Johnson (Stephen Nichols) about Gwen. “Stayla” probably suspects Gwen and Dr. Snyder were partners in a drug-dealing operation.

Days of Our Lives spoilers reveal that Gwen’s mother was a drug addict. She died when Gwen was a teenager, which is why she became ward of the state. Everyone knows how much Gwen hated her mother.

It is confirmed that on Friday, Jack will suspect Gwen is lying about her relationship with Dr. Snyder. With Gwen being connected to two deaths in Salem in such a short period of time, plus her mother’s overdose, could Jack jump to conclusions? It’s possible that he might completely freak out and fear that Gwen is a serial killer. Will he try to turn her into the police? Will he interrogate Gwen about all these deaths? Or will Jack stay quiet but spend days debating if he’s harboring Salem’s next serial killer? We will have to keep watching the NBC soap to find out.

The Bold And The Beautiful (B&B) Spoilers Friday, July 9: Thomas Spills All To Hope – Liam Freaked Out