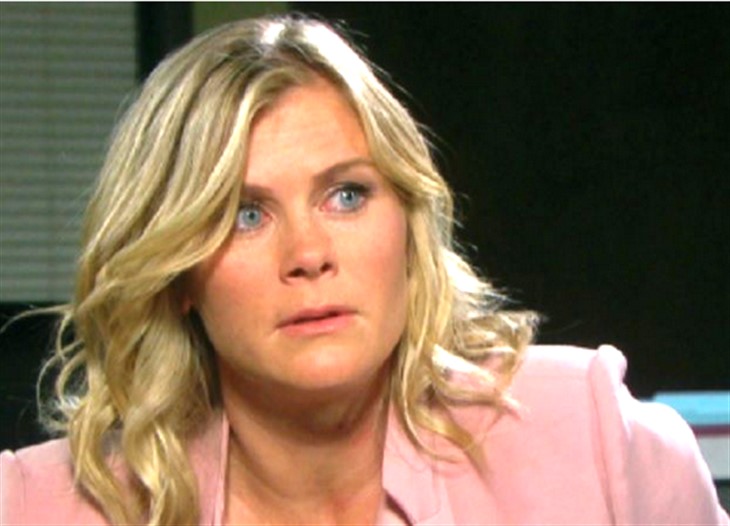 Days of Our Lives (DOOL) spoilers tease that no one knows where Sami Brady (Allison Sweeney) is at the moment. But as viewers know, someone abducted Sami right outside Rafe Hernandes’ (Galen Gering) house. While she is currently being held captive by unknown assailants, she will eventually make her way back home. And she surely will have quite a bit to say about her son, Johnny DiMera’s (Carson Boatman) planned movie about Sami’s life.

Days Of Our Lives Spoilers – Will Sami Brady Throw Her Mother Under The Bus!

Sami is a born attention seeker, so she will likely be thrilled that Johnny is making a movie of her life, based on a script by her other son Will Horton (Chandler Massey). She likely won’t even flinch when John Black’s (Drake Hogestyn) affair with her mother, Dr Marlena Evans (Deidre Hall) is depicted. Sami will likely reason that its all true and it shaped Sami’s life for years to come. But other parts of her mother’s history Sami may want to forget.

DOOL Spoilers – Sami Brady May Not Be So Keen To Portray Marlena Evan’s Possession By The Devil!

Sami’s mother has had quite an eventful life. After being brainwashed by Stefano DiMera (Joe Mascolo), Marlena was susceptible to possession by the devil! This was a very dark time in Salem history and Sami might want to see it on the cutting room floor. The same thing applies to the time Marlena believed herself to be the murderous Salem Stalker. While it all actually happened, Sami might prefer these things stay in the past. But with the devil roaming around Salem again, it might not be so easy to sweep it under the rug.

Days Of Our Lives Spoilers – Sami Brady Will Need To Decide Once And For All Who Her True Love Is!

Johnny is intent on portraying Sami’s one great love as Lucas Roberts (Bryan Datillo) and it’s true that Sami keeps coming back to Lucas. She even recently had an affair with Lucas, even though she was married to EJ DiMera (Dan Feuerrigel) at the time. When Sami disappeared, she was determined to fight for her marriage to EJ. But after several weeks in captivity, will Sami’s opinions have changed? Will she want Lucas or EJ to be portrayed on film as her greatest love?

Will Sami want Johnny to leave anything out of the movie based on her life? And who will Sami say is ultimately her one true love? Literally anything can happen in Salem, so stay tuned to Days of Our Lives airing weekdays on NBC. And don’t forget to check back right here regularly for all your Days of Our Lives news, information and spoilers!