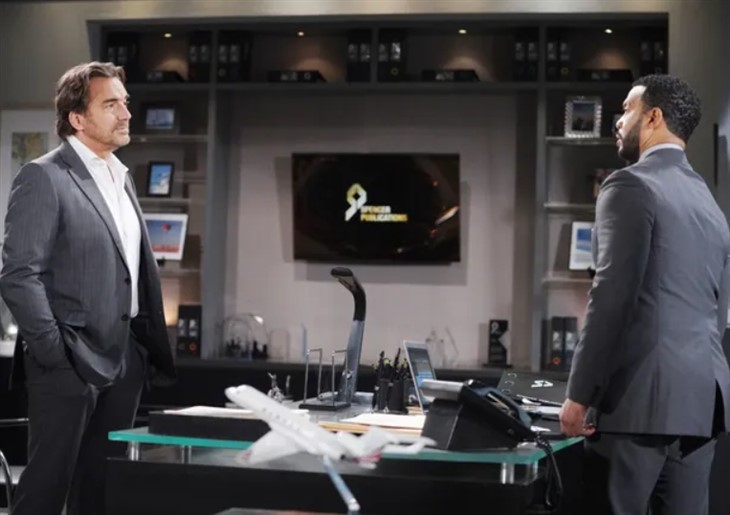 During the week of September 27-October 1 on The Bold and The Beautiful, Ridge Forrester (Thorsten Kaye) will get results from Justin Barber’s (Aaron D. Spears) spying mission on Carter Walton (Lawrence Saint-Victor) and Quinn Forrester (Rena Sofer). Ridge will hit the roof when his suspicions are confirmed and he finds out that Quinn and Carter are hitting the sheets yet again! This will result in Quinn defending herself to Ridge, explaining that Eric Forrester (John McCook) is okay with all of this, and in fact it was his idea that they should have an open marriage – at least on her part.

She won’t divulge Eric’s embarrassing ED situation to Ridge, however. Ridge won’t buy it – he’ll think it’s a pretty lame excuse as he knows Eric’s never been a swinger! In other drama during the week of September 27-October 1 on The Bold and The Beautiful, the tension between Steffy Forrester Finn (Jacqueline Macinnes Wood) and Sheila Carter (Kimberlin Brown) will come to a head. The two women will get into a serious confrontation and John “Finn” Finnegan (Tanner Novlan) will walk right into the middle of it Sheila will put Finn in a tight spot with her questions, and Finn again will have to choose his wife’s position over his birth mother’s. That won’t make Sheila happy!

Also during the week of September 27- October 1, viewers of The Bold and The Beautiful will see Sheila will get some advice from a new acquaintance, but he may not have the best advice for her since he doesn’t have enough information. The manager of the hotel Sheila is staying in is nosy, and his name is Keith (Nick Waters). He’ll get the wrong idea based on what little information Sheila divulges about her situation, and she may go down a dangerous path as a result of his advice! Knowing Sheila, Keith may be the one who runs into danger ultimately, and that would be from Sheila herself, as longtime viewers of The Bold and The Beautiful would not be surprised by!

Back to Eric, he finally confides his erectile dysfunction problems to a sympathetic Katie Logan (Heather Tom). Meanwhile, Ridge will deliver Justin’s intel to Eric and he’ll be in for a shock when Eric backs Quinn up! Eric and Ridge will get into a verbal confrontation in front of Quinn and she will hate what Eric is going through on account of her! Finally, Liam Spencer (Scott Clifton) and Steffy will have a heart to heart as they are spending time with their daughter, Kelly Spencer (Avalon and Colette Gray).

Liam will sympathize with Steffy’s situation with Sheila’s continuing efforts to manipulate Finn into letting her be a part of his and their baby Hayes Forrester Finn’s (Piper Harriot) life. Liam knows that Kelly is a part of that equation too and doesn’t want Sheila anywhere near her either! Meanwhile, Hope Logan Spencer (Annika Noelle) will lend a comforting ear to Finn, who will admit he is emotionally torn between his wife and his mother. Hope understands that the connection between a parent and child is very strong and will offer her support, which will be greatly appreciated.

The Bold And The Beautiful Spoilers October 4 – October 8: A Mystery Visitor Arrives – Paris Buckingham Moves Out

During the week of October 4 – October 8, a mystery visitor who is a familiar character on The Bold and The Beautiful will arrive back in town and create some drama for Hope and Liam! There is a possibility a presumed dead Caroline Spencer (previously Linsey Godfrey) could pop up and contest Douglas Forrester’s (Henry Joseph Samiri) custody.

Other spoilers for The Bold and The Beautiful have teased that Thomas Forrester (Matthew Atkinson) will again have love in his life – perhaps this will be a lost love! Caroline’s possible return would fit the bill! Another person making a change on The Bold and The Beautiful this week will be Paris Buckingham (Diamond White). She’ll realize she’s a third wheel at Finn and Steffy’s house and she will move out. Paris will try to reignite her romance with Zende Forrester-Dominguez (Delon de Metz) once she gets moved out. She will try to get Finn out of her mind and fantasies by surprising Zende with a fun day at the Dodgers Stadium – and she might even sing a song at the game!

Finally, during the week of October 4 – October 8, viewers of The Bold and The Beautiful will witness Eric having a major realization – one that will affect his future with Quinn. There are two possibilities of what this realization might be – one, perhaps he will discover a remedy for his ED, or he could find out an easily fix that neither he or his doctors took into consideration – perhaps a side effect of a medication? That would mean he again could give Quinn and himself a full love life and Carter wouldn’t have to be his “stand-in”! Or he could realize that Quinn and Carter are falling in love, and his ED has no cure or quick fix. He then could release Quinn to be with Carter in every way and urge her to be free and live her life.