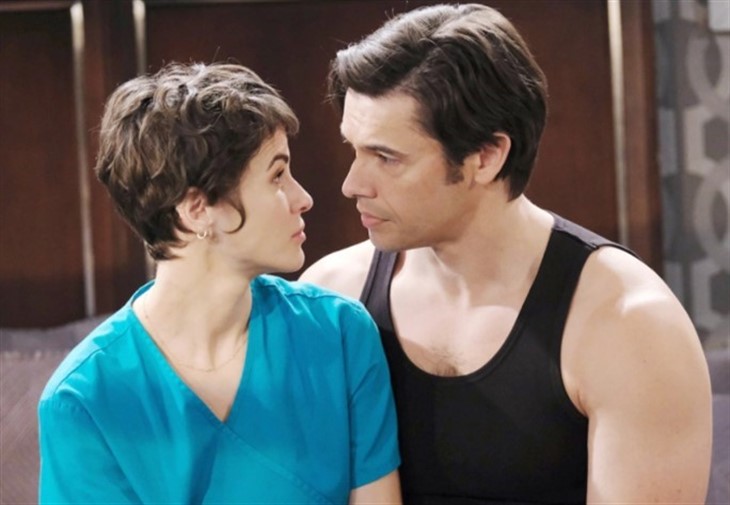 Days of Our Lives (DOOL) spoilers and rumors tease that Sarah Horton (Linsey Godfrey) will have some surprising news for Xander Kiriakis (Paul Telfer) in an upcoming episode of Days of Our Lives. Could Sarah be pregnant?

Days of Our Lives viewers will have noticed that Sarah has been more than just the usual emotional lately. It was a strange sight indeed for her to offer Xander cake when he wanted to know if she wanted to marry him, although it turned out fine. Great minds thought alike and it turned out that Sarah had a “proposal cake” made just for him for Valentine’s Day!

However, after this long of being together it seemed just a little bit odd that now, all of a sudden, she wants to get married – and especially after finding out that she would be the sole breadwinner as a physician at Salem University Hospital, with Xander having just resigned from Titan Industries! Of course, it’s possible that he may change his mind on Days of Our Lives and Victor Kiriakis (John Aniston) will have kept his position open for him, just as he did for his son Philip Kiriakis (Jay Kenneth Johnson).

Victor is trying hard to get Xander and Philip to get along and work together, but Xander became offended when Victor didn’t accept Philip’s resignation! It has been a long time now since Sarah found out her baby wasn’t really her baby, and they had been switched. She couldn’t handle it at first and had gone on the run with little Rachel Black (Josephine and Rosalind May). Even though she may be ready now to try for another baby, this time it may also be an unplanned pregnancy! It may also be why Sarah wants to get married so soon!

DOOL spoilers and updates hint Xander and Sarah will rush their wedding plans, even though Sarah’s mother, Maggie Kiriakis (Suzanne Rogers) will be leaving town! Maggie is going to visit her oldest daughter Summer Townsend (Marie Wilson) who apparently didn’t die from cirrhosis of the liver as she thought she would. She had shown up at Maggie’s door the night that Sarah went into labor with her late daughter Mackenzie “Mickey” Horton (Josephine and Rosalind May).

According to Days of Our Lives recaps, Summer had been the reason that Maggie couldn’t take Sarah to the hospital when she went into labor and the late Adrienne Kiriakis (Judi Evans) stepped in! Why else would Sarah want to rush into the wedding plans when her mom went out of town? She knows that Xander doesn’t have eyes for anyone but her, and she has no competition! Sarah must have found herself unexpectedly with a bun in the oven! Xander will be overjoyed that he is going to be a daddy and Sarah is going to be a mommy.

He loved little Mickey when they still had her, and would have done anything for her. It was just as heartbreaking for Xander when the truth came out as it was for Sarah, and Xander very nearly lost Sarah forever because of his part in the baby switch, which he and Victor had both been guilty of. They may have thought they had good reasons but it all backfired on them and Victor nearly lost his life when Kristen DiMera (Stacy Haiduk) stabbed him; that’s why she is in prison now.

Nowadays, there is no shame in being a single mom, but maybe Sarah wants her and Xander’s baby to start life out right with them being married, and maybe she just wants to seal the deal with her handsome lover anyway!