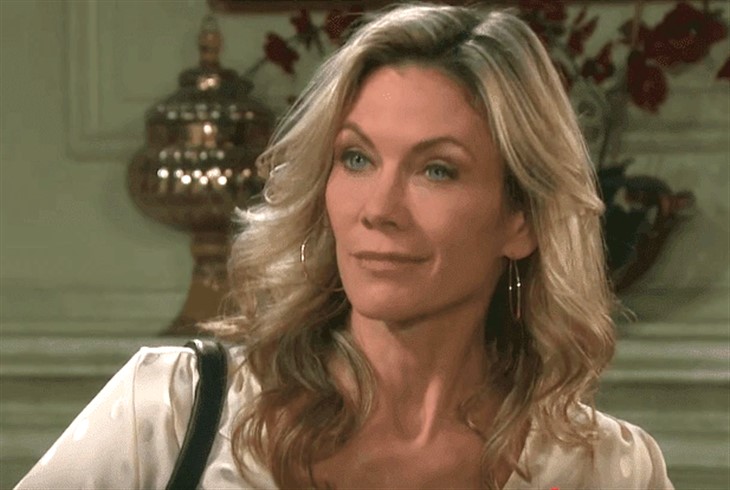 Days of Our Lives (DOOL) spoilers reveal that Philip Kiriakis (Jay Kenneth Johnson) is missing and presumed dead. While it seems that Philip did frame Brady Black (Eric Martsolf) in the beginning, he might not have finished the job. It’s possible that Kristen DiMera (Stacy Haiduk) might have picked up where Philip left off in order to get her own payback for being rejected.

DOOL spoilers reveal that Brady was brutally attacked by Philip. The Kiriakis heir has always had a problem with jealousy and rage when it comes to relationships. However, Philip has really gone over the edge this time. After believing that Brady and Chloe Lane (Nadia Bjorlin) slept together, Philip ripped out the sapling. Then, he went after Brady, but it might not be that simple.

Even though it looks like Philip is framing Brady for his murder, soap storylines are never that simple. Philip might have started out with this plan to get revenge on Brady, but he likely didn’t get a chance to finish it.

Chances are that Philip did knock Brady out with a crowbar and drag him to the riverbank. Philip probably even planted his phone with the fake messages, the knife, watch and somehow had an unconscious Brady ingest alcohol.

Days of Our Lives spoilers reveal that Shawn Brady (Brandon Beemer) refused to arrest Brady because of no body. Even Rafe Hernandez (Galen Gering) tells Kate Roberts (Lauren Koslow) that there isn’t enough evidence for an arrest yet. Suddenly, the fake leg is found right after that.

The timing is impeccable and suggests someone knows details about the investigation. Philip doesn’t seem to have that ability to know what the detectives are talking about… but Kristen does have those kinds of connections.

Kristen has escaped prison and wants to make Brady and Chloe pay. What are the chances that Kristen interrupted Philip’s plan and is holding him hostage somewhere? That would explain the fake leg being found and Philip suddenly disappearing. Philip began his revenge plot, but Kristen is finishing it so it goes the way she wants.

Philip might have planned to kill Brady, but Kristen doesn’t want him dead. Kristen does want him to pay for breaking her heart and splitting up their family. In Kristen’s warped mind, Brady would know what it felt like to be behind bars. Plus, she could gloat about how loving Chloe got him a prison sentence.

It was teased by Martsolf and Bryan Dattilo (Lucas Horton) several months ago during a Zoom fan event what to expect. The actors hinted that Brady and Chloe will end up together, but will have to survive Kristen first. So, it sounds like Kristen is very much a part of Philip’s disappearance. However, will the truth come out before it’s too late?

B&B Spoilers: Deacon And Hope Bond In A Fun Way