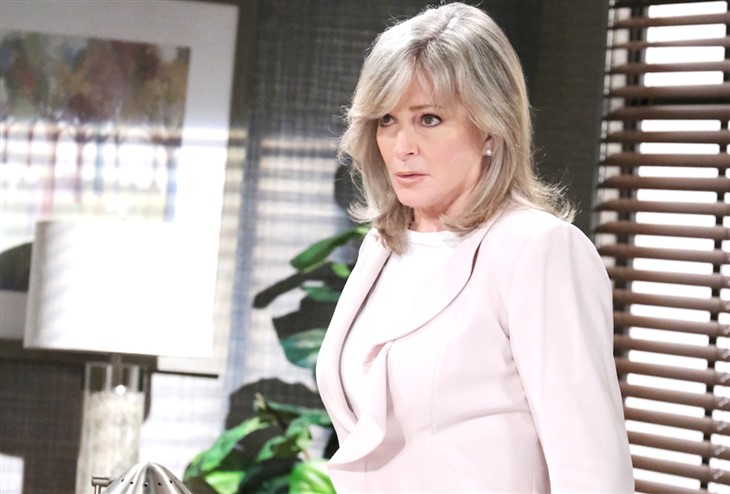 Days of Our Lives spoilers reveal that Marlena Evans (Deidre Hall) finds out about Susan Banks’ (Stacy Haiduk) vision. One sneak peek photo shows Marlena wielding a butcher knife. In another, Marlena is pressing a wooden cross to Susan’s head. What will happen to Susan and could Marlena actually commit murder?

Days Of Our Lives Spoilers – Dire Warning for ‘CIN’

DOOL spoilers reveal that Susan has a dire warning for Ben Weston (Robert Scott Wilson) and Ciara Brady Weston (Victoria Konefal). Susan has come back to Salem to warn the couple that there is someone bad after their unborn child. Due to the nature of Susan’s psychic ability, she can’t tell them who or even why. Sometimes more information will come in small pieces, even if it makes no sense at the time.

The evil feeling that Susan gets makes her collapse when she touches Ciara’s stomach. This is what makes both Ben and Ciara concerned and each deal with it in their own way.

Ben decides to go to Marlena and tell her what Susan is saying. However, Marlena hasn’t heard the baby news yet. So, when “MarDevil” finds out that Ciara is expecting, she is thrilled. When Ben explains that Susan is in town and had a “crazy moment,” the devil brushes it off.

Later, Marlena goes to see Ciara but there is another incident. Susan suddenly is getting the sense of an overpowering evil. That is when Marlena takes action and stops it from going any further.

Days Of Our Lives Spoilers – Weilding Knife and Cross

Days of Our Lives spoilers reveal that Susan’s overpowering moment is when she was about to connect the dots. Marlena intervenes before Susan can tell Ben and Ciara too much information. Marlena convinces Susan to come home with her, which turns into a huge mistake.

One phone published in Soap Opera Digest shows Marlena gripping a big knife out of a pumpkin. Another features Susan practically bending over backward while Marlena presses a large cross to her head.

While Marlena is dealing with Susan, Ciara tells Ben that the psychic was just about to tell her important information. That makes Ben realize that something is very wrong. Will he end up going to Marlena to find her terrorizing Susan?

It’s possible, but we know that the devil continues her evil scheme during the week of November 15. So, the devil definitely does some damage control. Could Susan “disappear” like John Black (Drake Hogestyn) did? Could the devil end up taking Susan’s life? Or will the psychic be the next person that the devil possesses? We will have to keep watching the NBC soap to find out what happens next with this storyline.