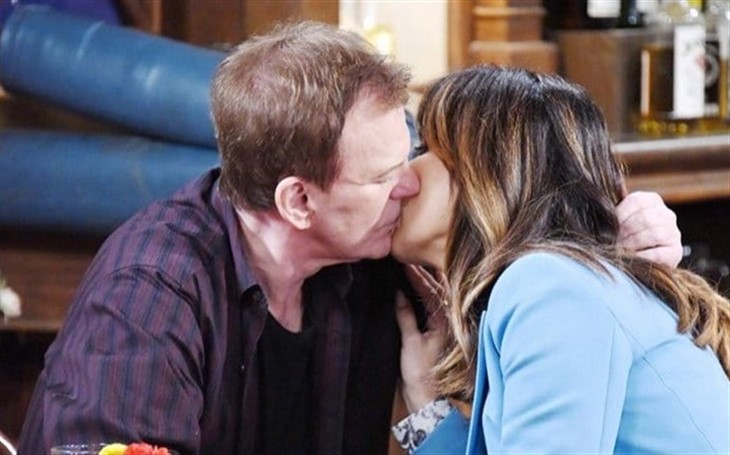 Days of Our Lives Spoilers tease Roman Brady (Josh Taylor) has made it clear that he is interested in Kate Roberts (Lauren Koslow). Kate has asked for space and Roman has agreed to wait. But Kate may soon realize that she is just wasting time. Kate has had many failed relationships over the years, most recently with Jake DiMera (Brandon Barash). But things didn’t end well, and Jake is back with Gabi Hernandez (Camilla Banus).

Furious that Jake reunited with Gabi, Kate pretended to be blind in order to keep Jake and Gabi apart. Kate didn’t want Jake anymore, but she didn’t want him to get away with dumping her. Kate revealed her true intentions when it was time to choose the new CEO of DiMera Enterprises.

According to Days of Our Lives spoilers, Jake thought he had Kates support but she dumped him on the spot. Although Kate was glad to be free of Jake, the failed romance has caused her to put up some walls. But Roman is willing to wait because he believes that Kate is worth it.

DOOL Spoilers – Kate Roberts And Roman Brady Were Almost Married Once Before!

This isn’t the first time that Kate and Roman have been together. They were quite happy together until Roman was supposedly murdered by the Salem Stalker. Although it’s a bit convoluted, Roman was eventually revealed to be alive but Roman and Kate never got back together. But they have always been fond of each other! When Kate had no other employment options, she took a job working as a waitress at Brady’s Pub.

Days Of Our Lives Spoilers – Could Now Finally Be The Time For Roman Brady And Kate Roberts!

Kate has always been her own worst enemy on Days of Our Lives. But perhaps she has finally realized that Roman is a good man. He may not be as exciting as some of her former lovers, but she will always be able to depend on him. And Roman deserves real love. He’s been alone for a long time, except for the brief time he was involved with Anna DiMera (LeAnn Hunley). As long as Kate doesn’t leave him for greener pastures, perhaps Kate and Roman have a chance at love.

Should Roman and Kate get back together? Will Kate realize she won’t find anyone better for her? Or will she continue to be her own worst enemy? Anything can happen in Salem so stay tuned to Days of Our Lives airing weekdays on NBC. And don’t forget to check back right here regularly for all your Days of Our Lives news, information and spoilers!

B&B Spoilers: Ridge And Liam Make A Vow To Protect Their Family