B&B Comings And Goings: Finn And Sheila Heat Up The Hospital, A Beautiful Model Returns 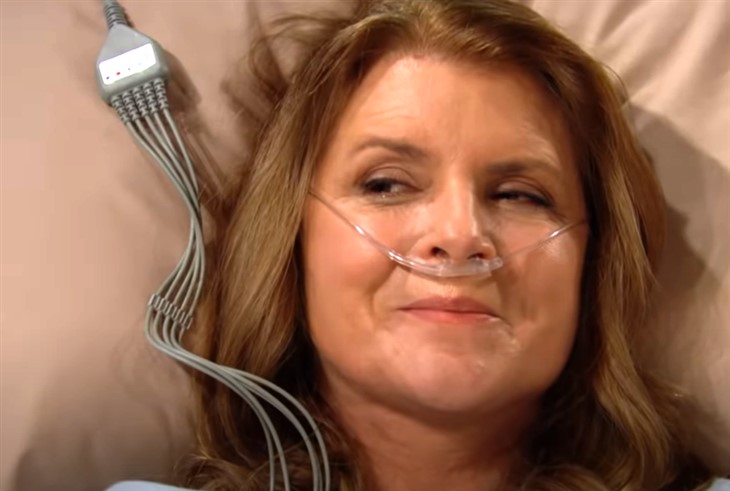 The Bold and the Beautiful (B&B) spoilers for the week show a torrent of action as LA heats up for fall. August Sweeps brought a huge plot to the forefront and the ramifications and complications of Sheila Carter’s (Kimberlin Brown) return will be felt in the days and weeks to come.

B&B spoilers for the week of September 6, 2021 shows that Sheila is large and in charge and interacting with a handful of newbies. Also popping up is a Forrester Creations model we have seen before. Who is coming and who is going in La-La Land this week B&B fans? Let’s get started dishing the delicious dirt!

The Bold And The Beautiful Spoilers – The week Of September 6, 2021 Shows It’s Raining Nurses

John Finn (Tanner Novlan) has been a naughty boy. He is caught in the mother of all conflicts with Sheila Carter and this week these two will mix it up at the hospital.

This means that a couple of nurses make the scene and share dialogue with the biological mother and son. Look for Edelyn Okano to appear as Nurse Emily on Tuesday, September 7. She will be in scenes with Finn and Sheila; as a referee perhaps?

On Thursday, September 9 we will see Thais Menendez who will also appear as a The Bold and the Beautiful nurse. Maybe Finn is giving Sheila a dose of her own medicine?

B&B Brings Back a Doctor

Clearly the hospital is where it’s all happening this week. The drama is complicated by the appearance of Dr. Joyce Griffith (Lisa Canning) who is seen on Monday, September 6, and Friday, September 10. What in the world is going on at the hospital where Finn works? Is his baby sick? Or maybe he is just sick and tired of dealing with wacko mom Sheila?

The Bold And The Beautiful Spoilers Bring A Model To Town

On Tuesday, September 7, The Bold and the Beautiful comings and goings reveal Shireen Crutchfield appears as Sequoyah. She has been seen as a Forrester Creations model beginning in 2007. She’ll interact with designer Zende Forrester (Delon de Metz). Will his kind-of boo Paris Buckingham (Diamond White) be jealous? Right now she’s so into Finn we doubt she will mind if her guy gets his flirt on with a FC model. Then again, jealously is a fickle animal!