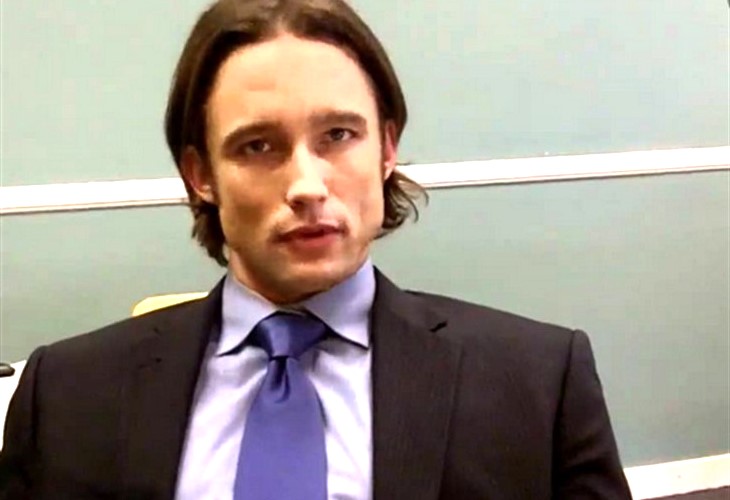 Days of Our Lives (DOOL) spoilers tease that an off-the-rails Philip Kiriakis (Jay Kenneth Johnson) will catch Brady Black (Eric Martsolf) and Chloe Lane (Nadia Bjorlin) in bed and assume the worst, in an upcoming episode of Days of Our Lives! But – it won’t be what he thinks!

Days of Our Lives viewers will recall that Philip flipped out when he found out that Brady and Chloe were intending to go on a business trip together in a recent episode of Days of Our Lives. The destination had originally been New York, where Chloe was excited about seeing her mother and her son, and had happily ran into another room at Basic Black to call her little boy.

Philip had questioned why Brady couldn’t go on the trip himself or why Nicole Walker (Arianne Zucker) couldn’t go with him. Chloe told him Nicole was taking the week off due to emotional issues following the big breakup with Eric Brady (Greg Vaughan). However, it looks like their business trip is delayed when their plane is grounded, and they have to unexpectedly spend the night in a hotel in Pennsylvania.

Days of Our Lives spoilers reveal that Brady and Chloe work together, and Philip has jealousy issues. Deep down, Days of Our Lives viewers will recall that Brady wishes he and Chloe could get back together, but for now he is forced to respect her wishes about wanting to continue moving forward with Philip. Brady believes firmly that Philip and Chloe are not a good match, and that he would be better for her than Philip.

Being her boss does put Brady in an awkward position – since it’s never a good idea to become romantically involved with a co-worker, and especially not in a supervisory position. Brady is definitely interested in Chloe, and his feelings are near the surface so he has to be careful to hide them in front of Philip, although he and Chloe have let each other know that their feelings are mutual. Whatever Philip’s feelings might be for Chloe don’t factor into the equation at all for Brady, however.

Days of Our Lives spoilers hint Brady will act as a gentleman with Chloe no matter what happens; but they are unable to get separate rooms at the hotel! In fact, they cannot even get one with separate beds, and so Chloe tells Brady to sleep in the bed with her as opposed to sleeping on the floor. The problem is, Philip’s jealousy compels him to fly to the Pennsylvania hotel himself, thinking of the worst case scenario and even doubting that the trip was for business, in his worst fears even though he knows better!

Brady may be tempted to fool around but he won’t out of respect for Chloe. But once Philip shows up in the room, Brady may get his chance to reconcile with Chloe; Days of Our Lives viewers know that Chloe wants Philip’s trust, and it’s most obvious that she doesn’t have it! Brady won’t mind a bit if she dumps Philip over his insane jealousy!