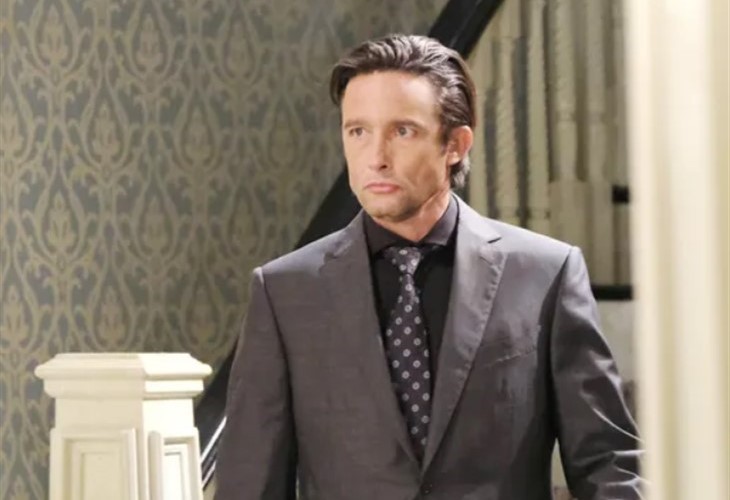 Days of Our Lives spoilers reveal that Chloe Lane (Nadia Bjorlin) took Belle Brady’s (Martha Madison) advice. Chloe chose Philip Kiriakis (Jay Kenneth Johnson) over Brady Black (Eric Martsolf). However, it is clear that Chloe’s heart beats for Brady. When the two go on a business trip to New York, Philip flips out and he just might have a reason to be so worried.

DOOL spoilers reveal that Chloe was torn between Brady and Philip. She turned to Belle for advice on her love triangle. Belle told Chloe that Brady has a lot of baggage and maybe she should give Philip another shot. So, that is exactly what Chloe has done but it doesn’t seem like it was the right choice.

Even though Philip and Chloe attend events together, they don’t stay as a couple. While Philip is left by himself, Chloe spends all her time fawning over Brady. It’s not something malicious and Chloe might not even be aware she’s doing it. However, everyone else has noticed, including Philip. The only reason he is hanging onto Chloe is that he truly does love her and has ever since high school.

Days of Our Lives spoilers for the week of August 23 reveal that Brady will invite Chloe on a trip. Brady might want Chloe for himself, but he wouldn’t invite her on a romantic trip while she’s involved with another man. So, going to New York must be a business trip for Basic Black. Chloe will accept but Philip will not be happy about it. In fact, it is teased that Philip completely flips out when Chloe tells him the news.

In the summer promo that was released a few months ago, Brady and Chloe were seen passionately kissing. The Salemites have kissed a few times since then, but all of those smooches were tame in comparison to the promo. So, with summer coming to an end, that scene must be coming up. Could their New York trip lead to Brady and Chloe engaging in passion? It certainly seems likely, which means Philip will be heartbroken all over again.

Do you think that Chloe is better with Philip or Brady? Did she make the right choice or will fate step in to reunite Brady and Chloe? If Philip ends up with a broken heart, who would you like to see as his next love interest? We will have to keep watching the NBC soap to find out what happens during this New York trip.